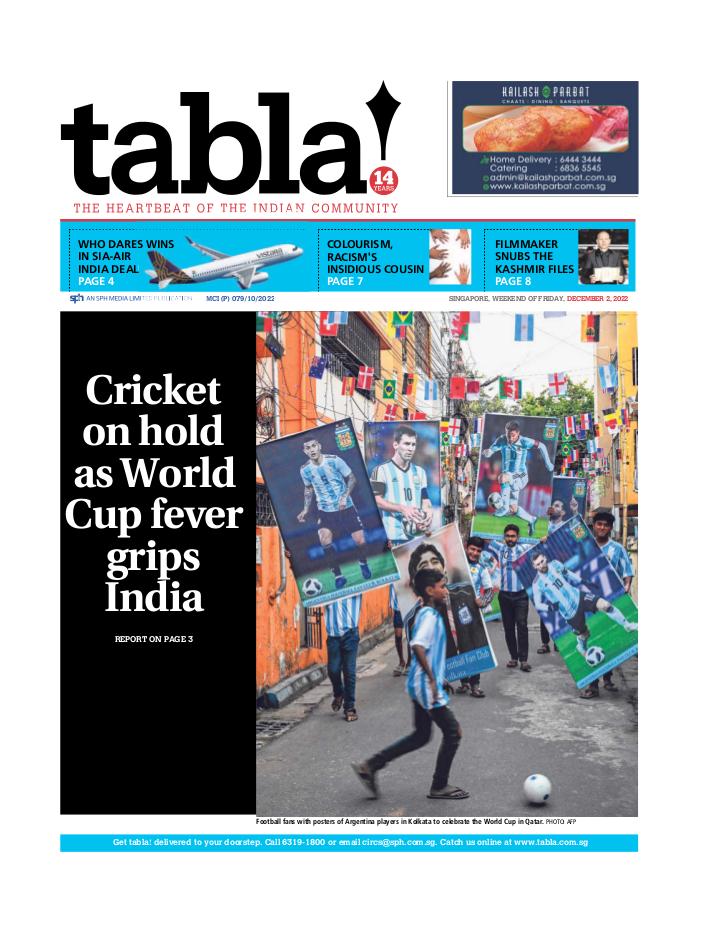 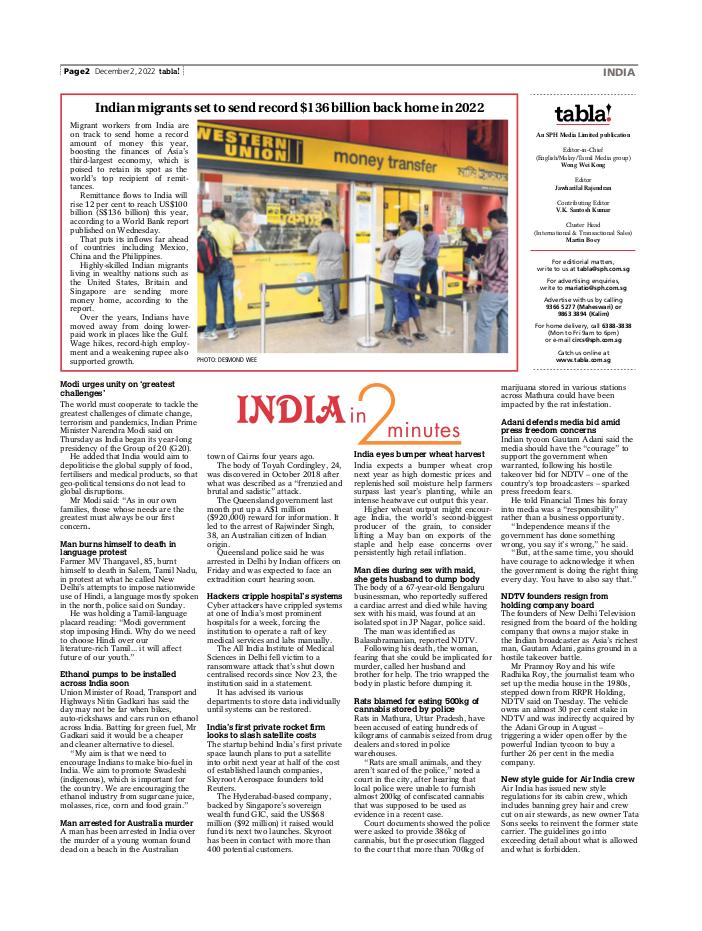 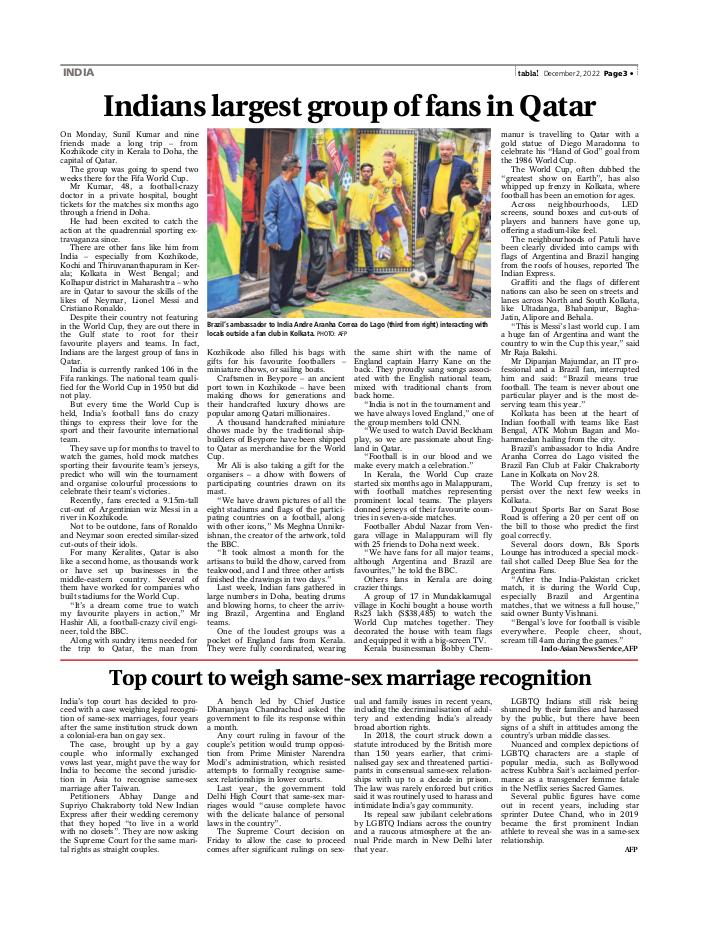 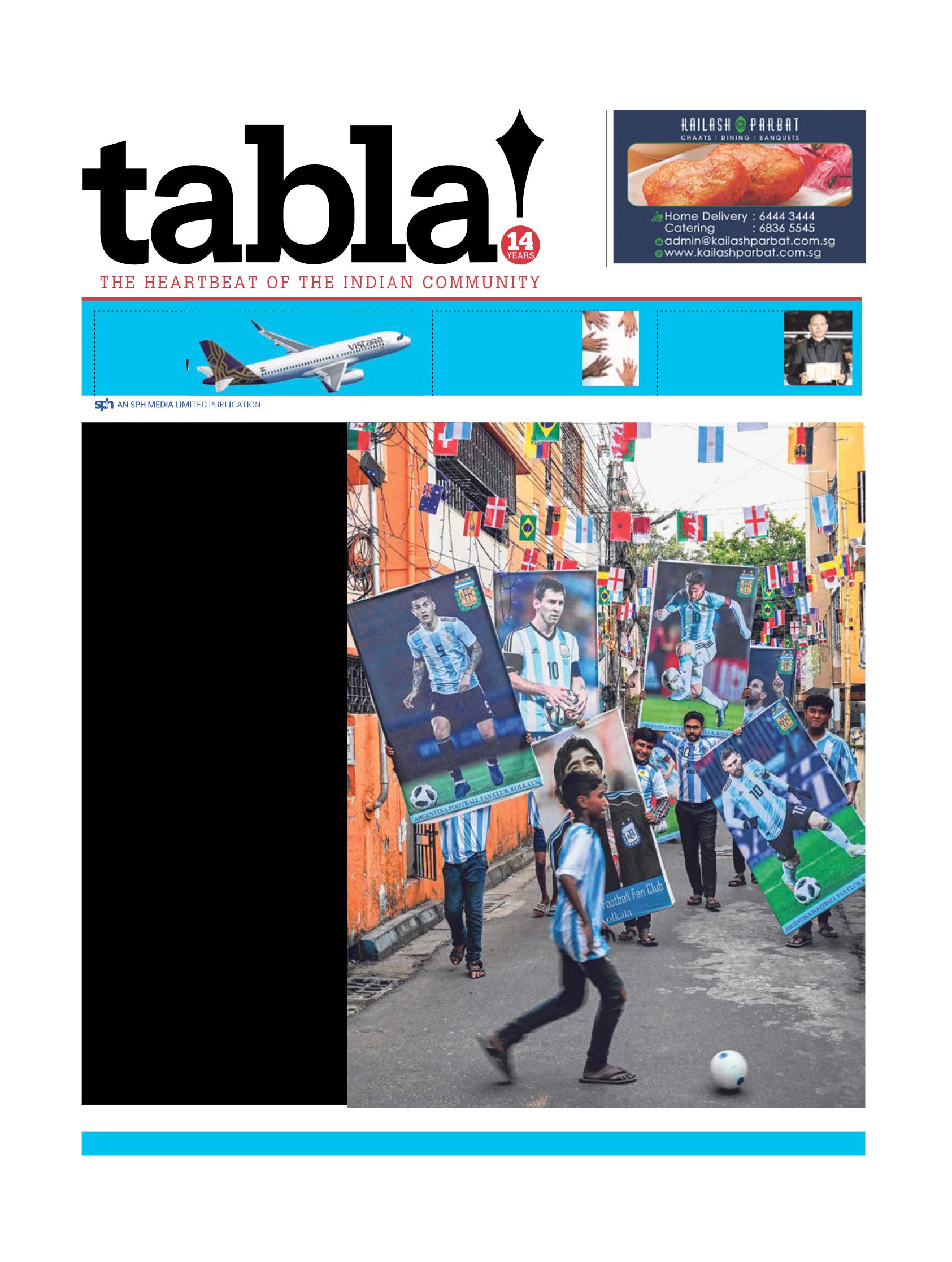 delivered to your doorstep. Call 6319-1800 or email circs@sph.com.sg. Catch us online at www.tabla.com.sg

Football fans with posters of Argentina players in Kolkata to celebrate the World Cup in Qatar. 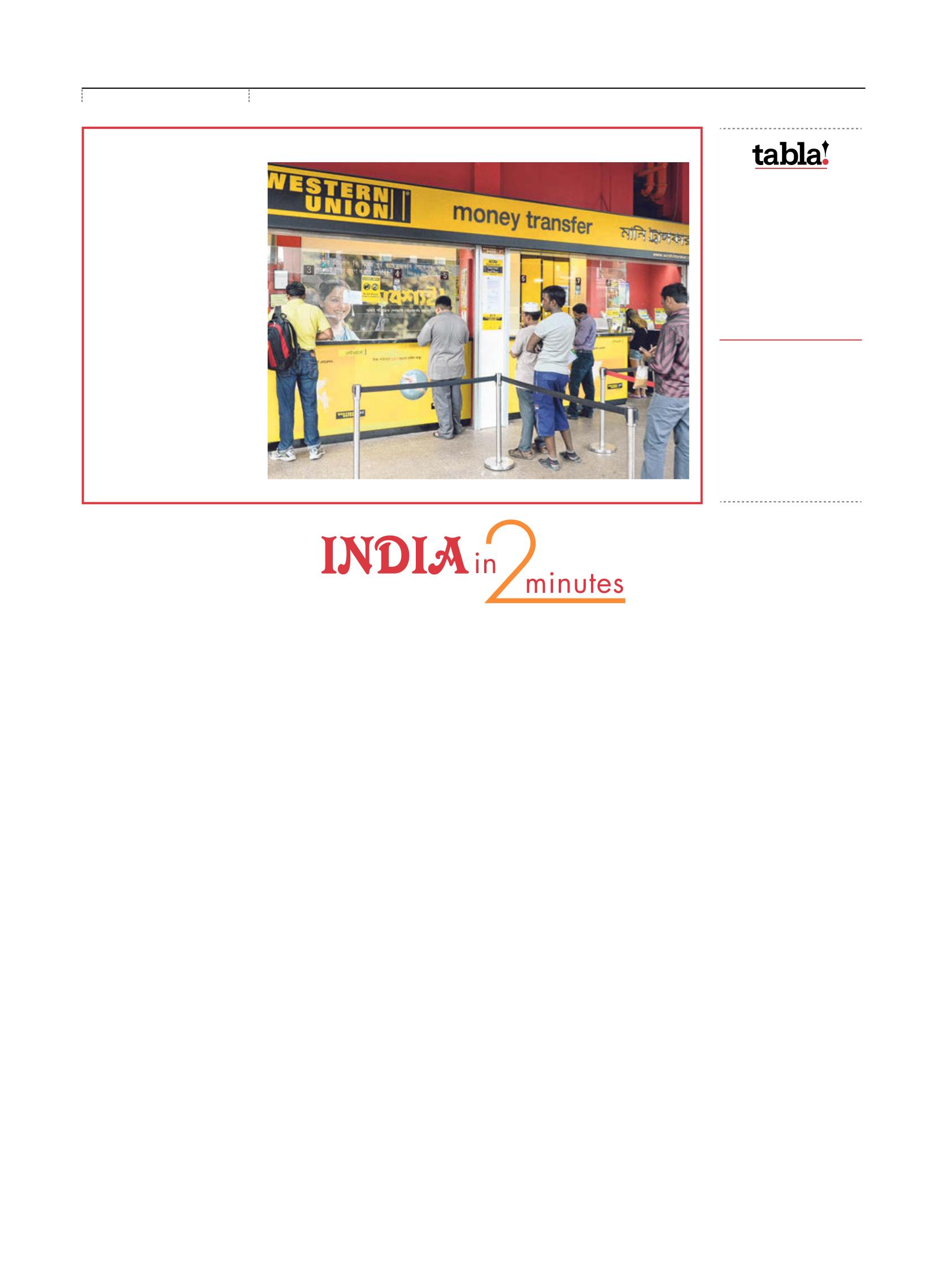 The world must cooperate to tackle the

Thursday as India began its year-long

He added that India would aim to

depoliticise the global supply of food,

fertilisers and medical products, so that

geo-political tensions do not lead to

Mr Modi said: “As in our own

families, those whose needs are the

greatest must always be our first

Man burns himself to death in

himself to death in Salem, Tamil Nadu,

in protest at what he called New

use of Hindi, a language mostly spoken

in the north, police said on Sunday.

He was holding a Tamil-language

stop imposing Hindi. Why do we need

to choose Hindi over our

literature-rich Tamil... it will affect

future of our youth.”

Ethanol pumps to be installed

Union Minister of Road, Transport and

Highways Nitin Gadkari has said the

day may not be far when bikes,

auto-rickshaws and cars run on ethanol

Gadkari said it would be a cheaper

and cleaner alternative to diesel.

“My aim is that we need to

encourage Indians to make bio-fuel in

India. We aim to promote Swadeshi

(indigenous), which is important for

the country. We are encouraging the

A man has been arrested in India over

the murder of a young woman found

dead on a beach in the Australian

town of Cairns four years ago.

The body of Toyah Cordingley, 24,

was discovered in October 2018 after

what was described as a “frenzied and

month put up a A$1 million

led to the arrest of Rajwinder Singh,

38, an Australian citizen of Indian

Queensland police said he was

arrested in Delhi by Indian officers on

Friday and was expected to face an

at one of India’s most prominent

hospitals for a week, forcing the

institution to operate a raft of key

The All India Institute of Medical

Sciences in Delhi fell victim to a

centralised records since Nov 23, the

institution said in a statement.

It has advised its various

until systems can be restored.

The startup behind India’s first private

into orbit next year at half of the cost

wealth fund GIC, said the US$68

million ($92 million) it raised would

fund its next two launches. Skyroot

next year as high domestic prices and

surpass last year’s planting, while an

lifting a May ban on exports of the

Man dies during sex with maid,

she gets husband to dump body

The body of a 67-year-old Bengaluru

a cardiac arrest and died while having

sex with his maid, was found at an

The man was identified as

Following his death, the woman,

fearing that she could be implicated for

murder, called her husband and

brother for help. The trio wrapped the

body in plastic before dumping it.

Rats blamed for eating 500kg of

Rats in Mathura, Uttar Pradesh, have

been accused of eating hundreds of

kilograms of cannabis seized from drug

dealers and stored in police

“Rats are small animals, and they

aren’t scared of the police,” noted a

court in the city, after hearing that

local police were unable to furnish

that was supposed to be used as

evidence in a recent case.

were asked to provide 386kg of

cannabis, but the prosecution flagged

to the court that more than 700kg of

across Mathura could have been

impacted by the rat infestation.

media should have the “courage” to

support the government when

takeover bid for NDTV – one of the

He told Financial Times his foray

into media was a “responsibility”

rather than a business opportunity.

“Independence means if the

government has done something

“But, at the same time, you should

have courage to acknowledge it when

the government is doing the right thing

every day. You have to also say that.”

The founders of New Delhi Television

resigned from the board of the holding

company that owns a major stake in

the Indian broadcaster as Asia’s richest

Mr Prannoy Roy and his wife

Radhika Roy, the journalist team who

stepped down from RRPR Holding,

NDTV said on Tuesday. The vehicle

owns an almost 30 per cent stake in

NDTV and was indirectly acquired by

the Adani Group in August –

triggering a wider open offer by the

powerful Indian tycoon to buy a

further 26 per cent in the media

regulations for its cabin crew, which

carrier. The guidelines go into

exceeding detail about what is allowed

and what is forbidden.

Migrant workers from India are

on track to send home a record

boosting the  finances  of  Asia’s

third-largest   economy,   which   is

poised to retain its spot as the

Remittance flows to India will

according to a World Bank report

That puts its inflows far ahead

of   countries   including   Mexico,

China and the Philippines.

living in wealthy nations such as

money home, according to the

Over the years, Indians have

moved away from doing lower-

ment and a weakening rupee also 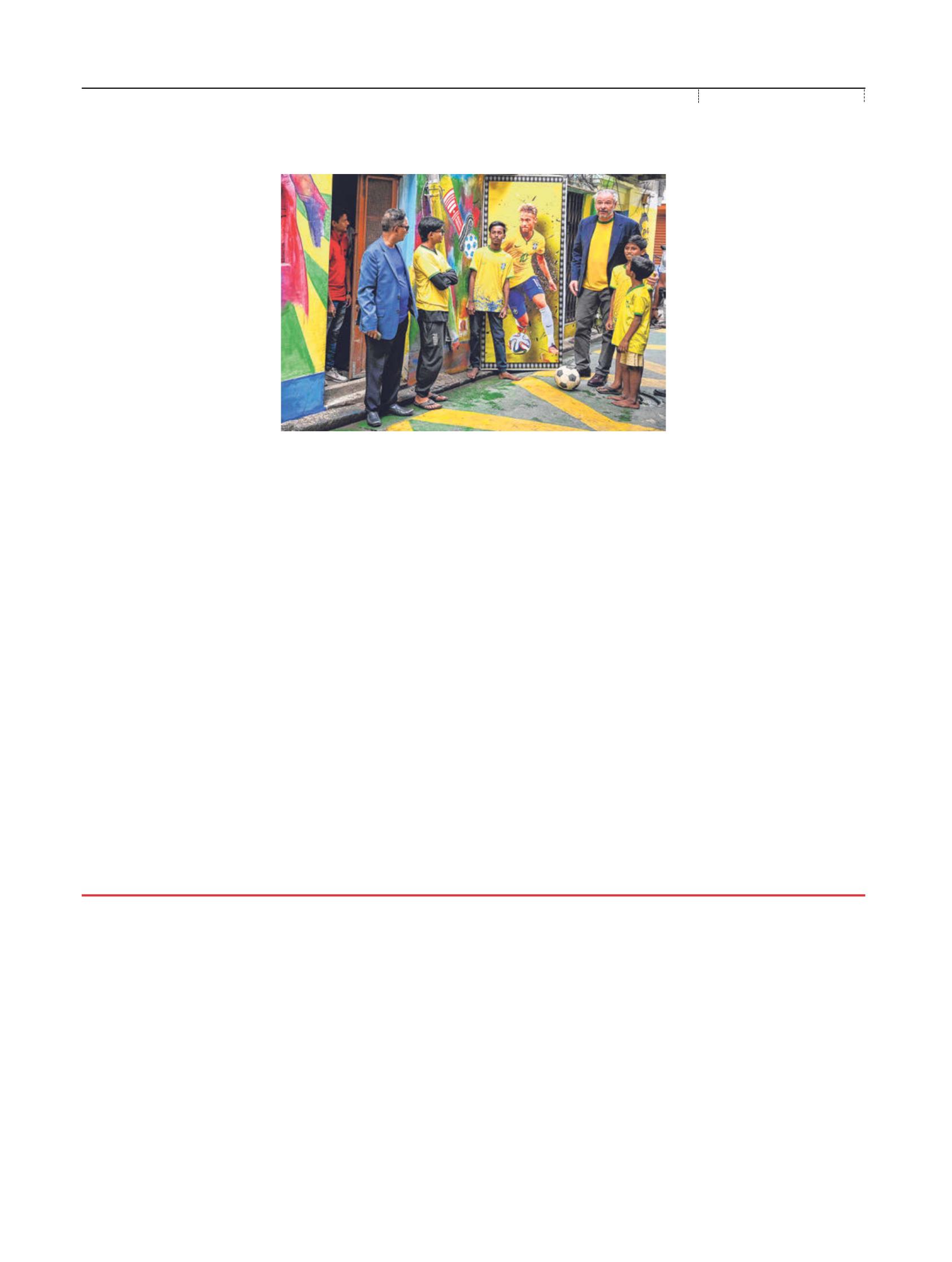 weeks there for the Fifa World Cup.

through a friend in Doha.

Kochi and Thiruvananthapuram in Ker-

Kolhapur district in Maharashtra – who

Despite   their   country   not   featuring

in the World Cup, they are out there in

Indians are the largest group of fans  in

sport   and   their   favourite   international

They save up for months to travel to

and   organise   colourful   processions   to

Not to be outdone, fans  of Ronaldo

cut-outs of their idols.

built stadiums for the World Cup.

Along with sundry items needed for

making   dhows   for   generations   and

their   handcrafted   luxury   dhows   are

builders of Beypore have been shipped

to Qatar  as  merchandise  for  the  World

participating   countries   drawn   on   its

with other icons,” Ms Meghna Unnikr-

ishnan, the creator of the artwork, told

artisans to build the dhow, carved from

teakwood, and I and three other artists

finished the drawings in two days.”

They   were   fully   coordinated,   wearing

mixed   with   traditional   chants   from

“India is not in the tournament and

we have always loved England,” one of

“We used  to  watch David Beckham

make every match a celebration.”

started six months ago in Malappuram,

donned jerseys of their favourite coun-

with 25 friends to Doha next week.

although   Argentina   and   Brazil   are

favourites,” he told the BBC.

and equipped it with a big-screen TV.

celebrate his “Hand of God” goal from

football has been an emotion for ages.

The   neighbourhoods   of   Patuli   have

from the roofs of houses, reported The

nations can also be seen on streets and

“This is Messi’s last world cup. I am

country to win the Cup this year,” said

hammedan hailing from the city.

Lounge has introduced a special mock-

“After   the   India-Pakistan   cricket

matches, that we witness a full house,”

scream till 4am during the games.”

a colonial-era ban on gay sex.

Express   after   their   wedding   ceremony

the Supreme  Court  for  the  same mari-

laws in the country”.

including the decriminalisation of adul-

The law  was rarely  enforced  but critics

said it was routinely used to harass and

shunned by their families and harassed

Nuanced and complex depictions of

in the Netflix series Sacred Games.

athlete to reveal she was in a same-sex

locals outside a fan club in Kolkata. 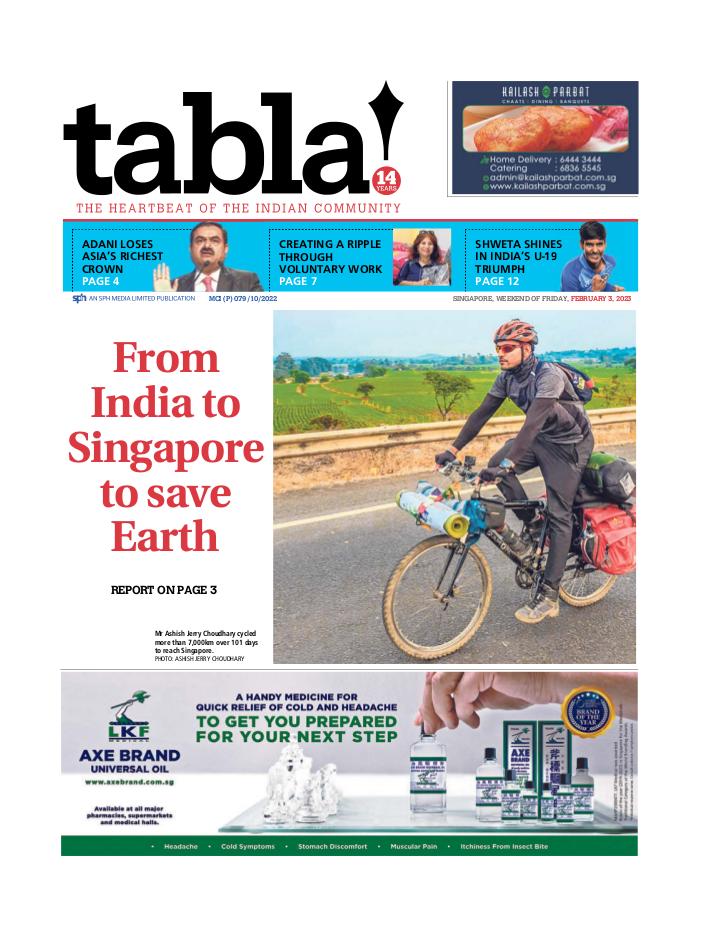 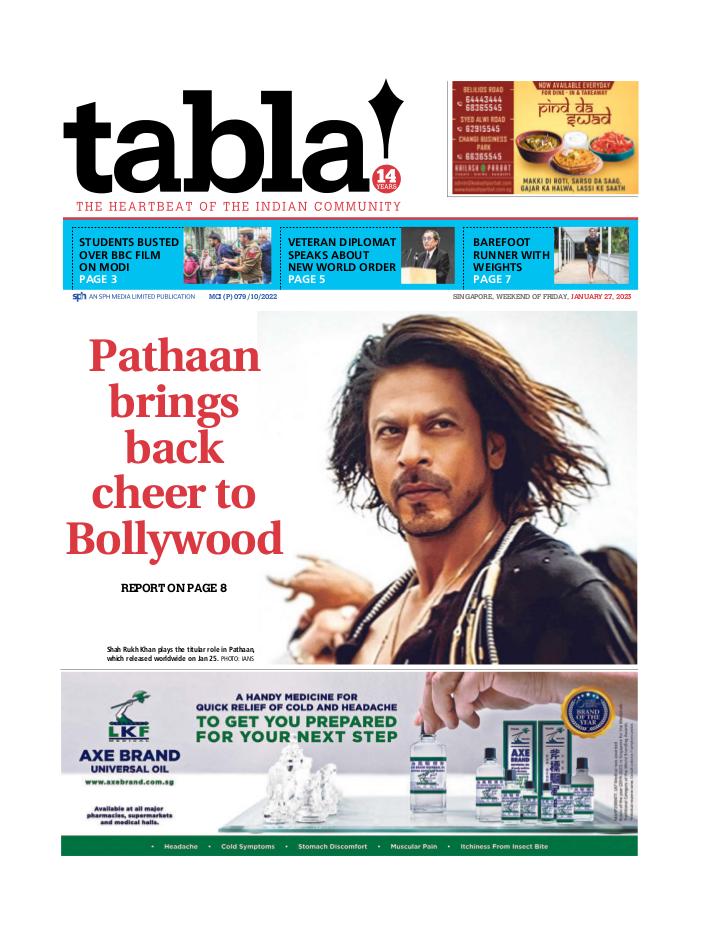 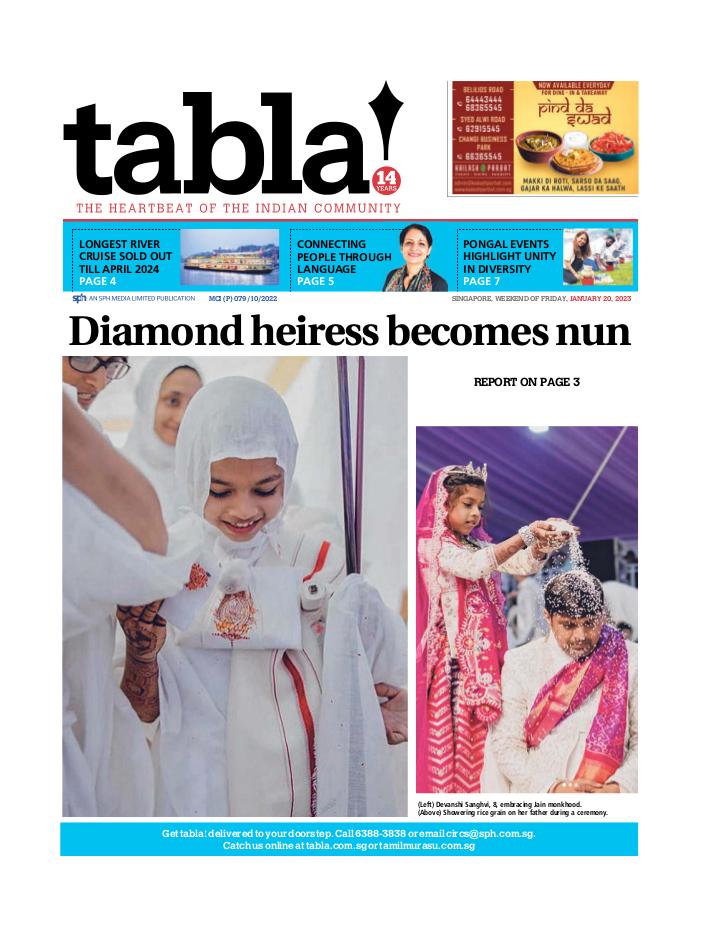 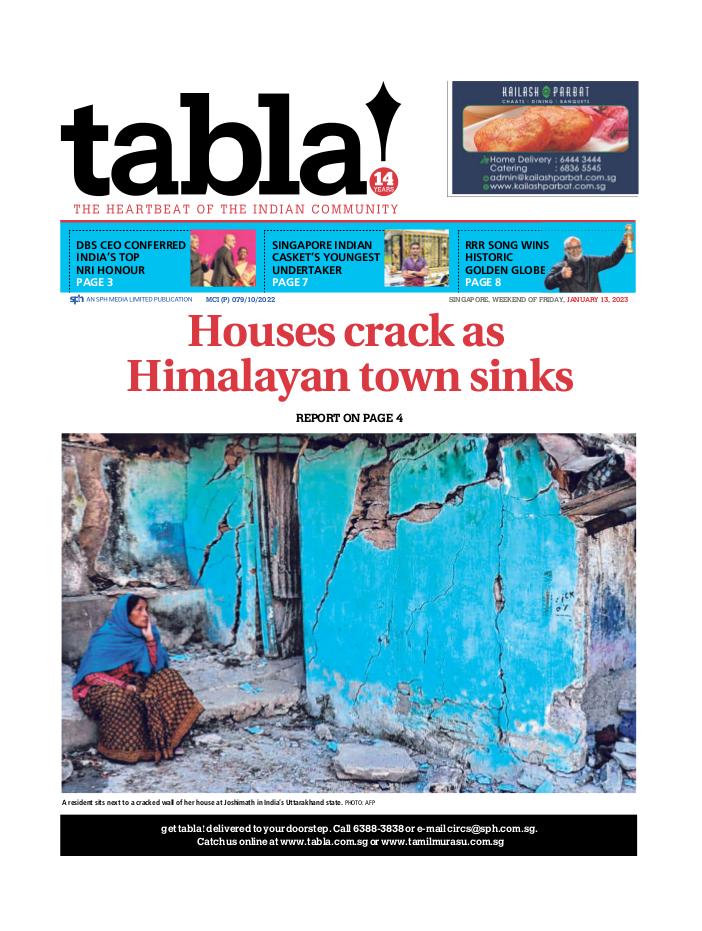 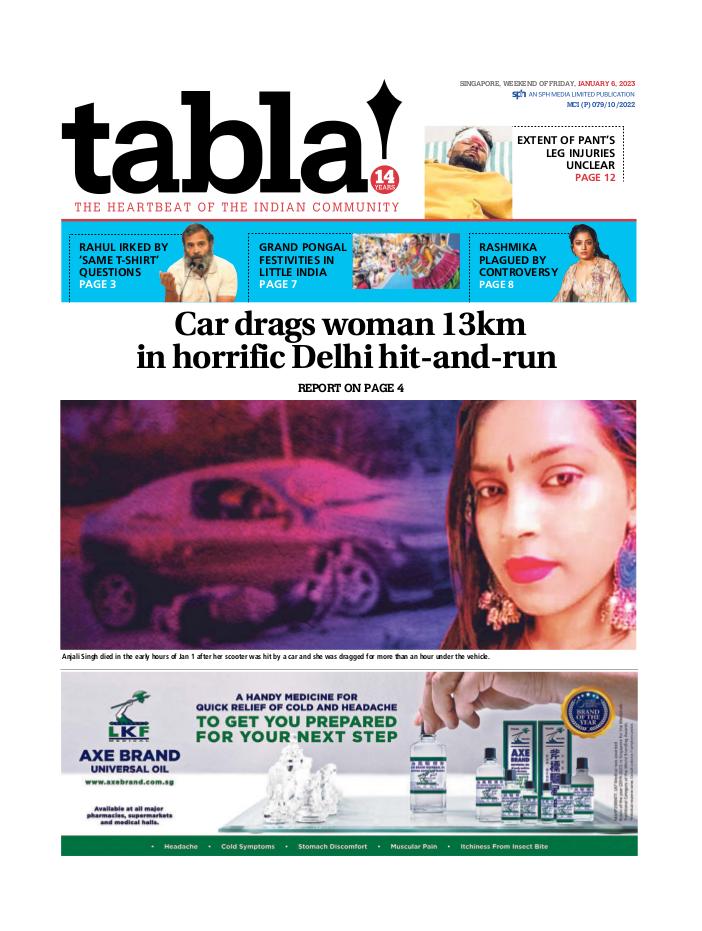 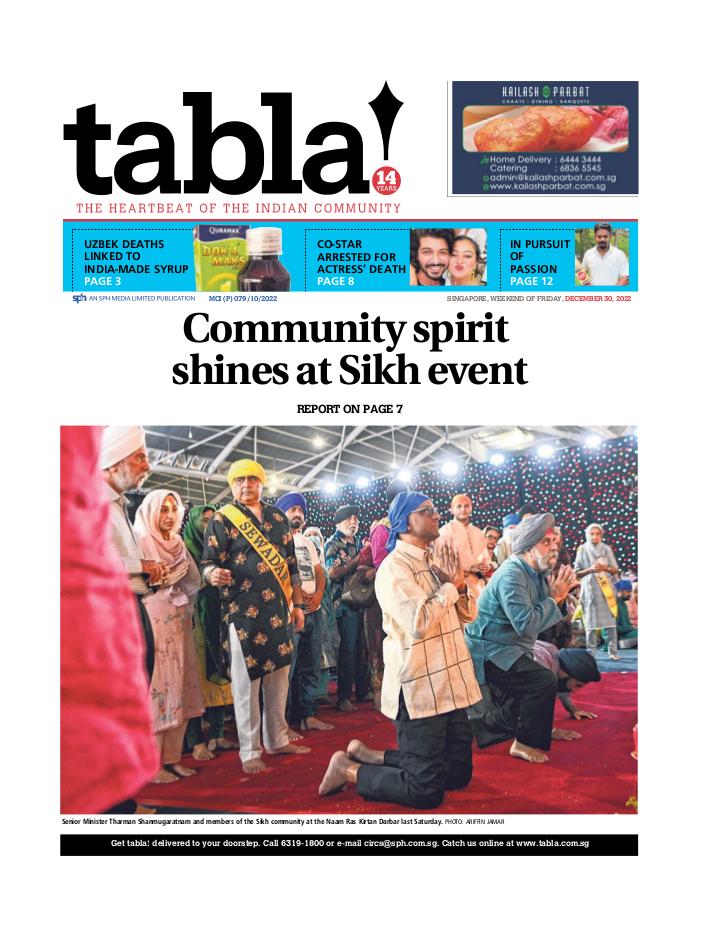 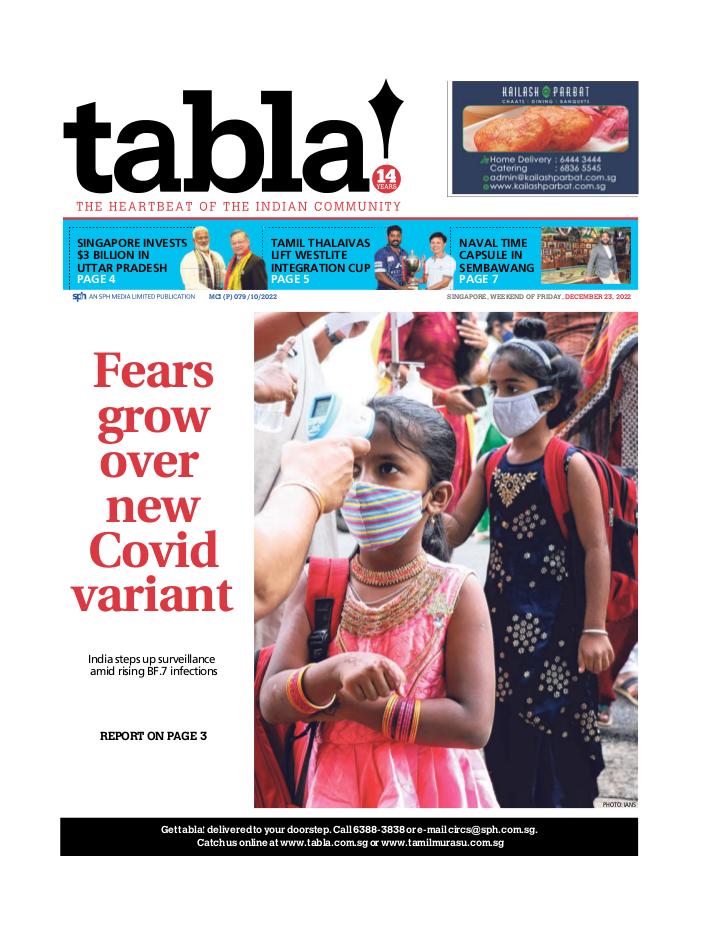 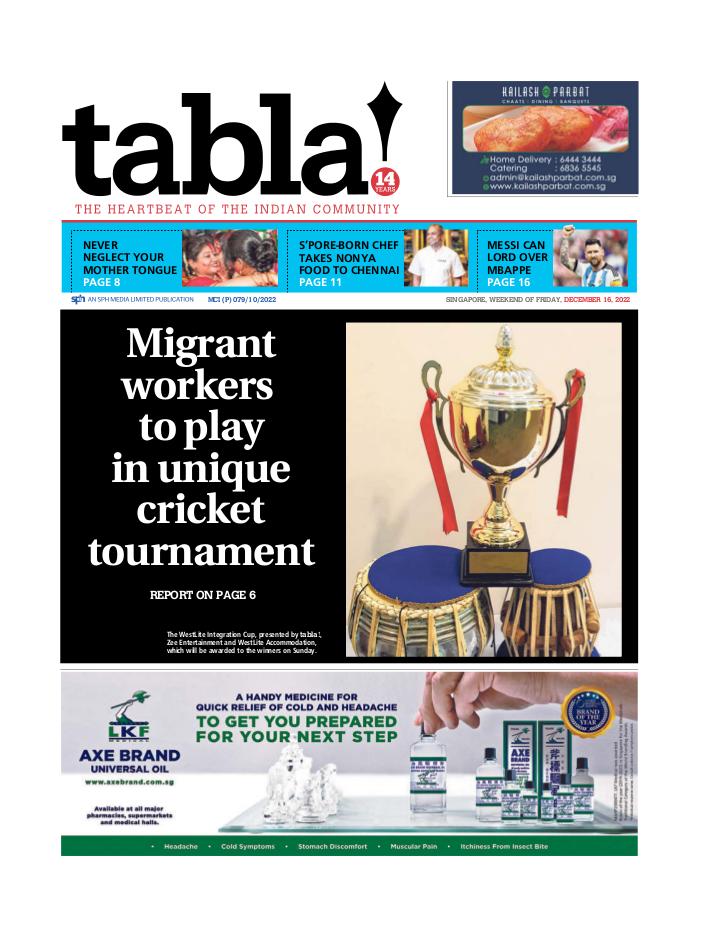 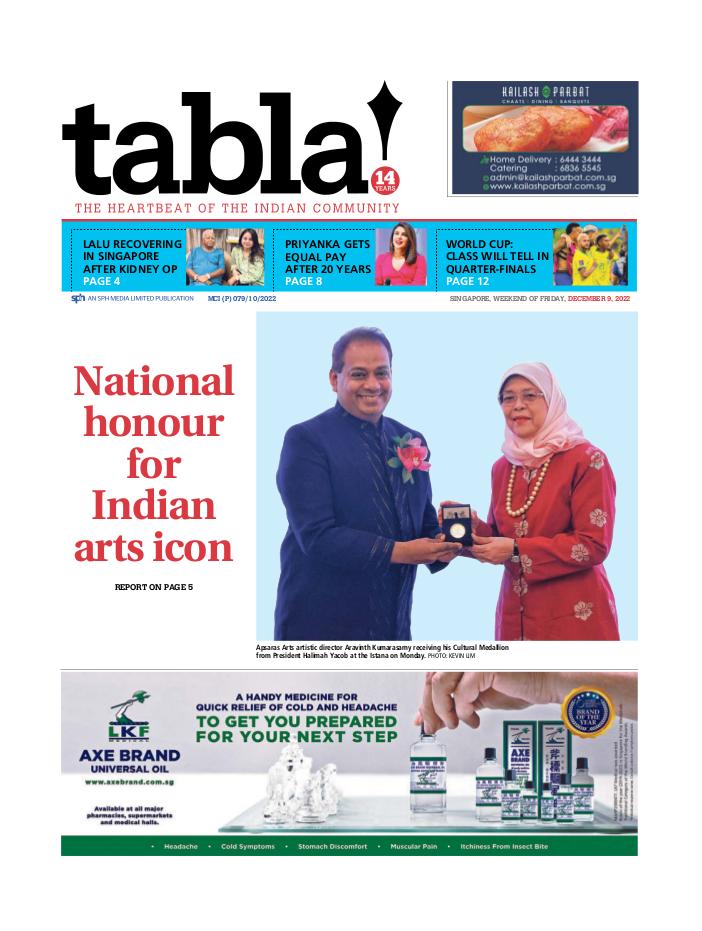 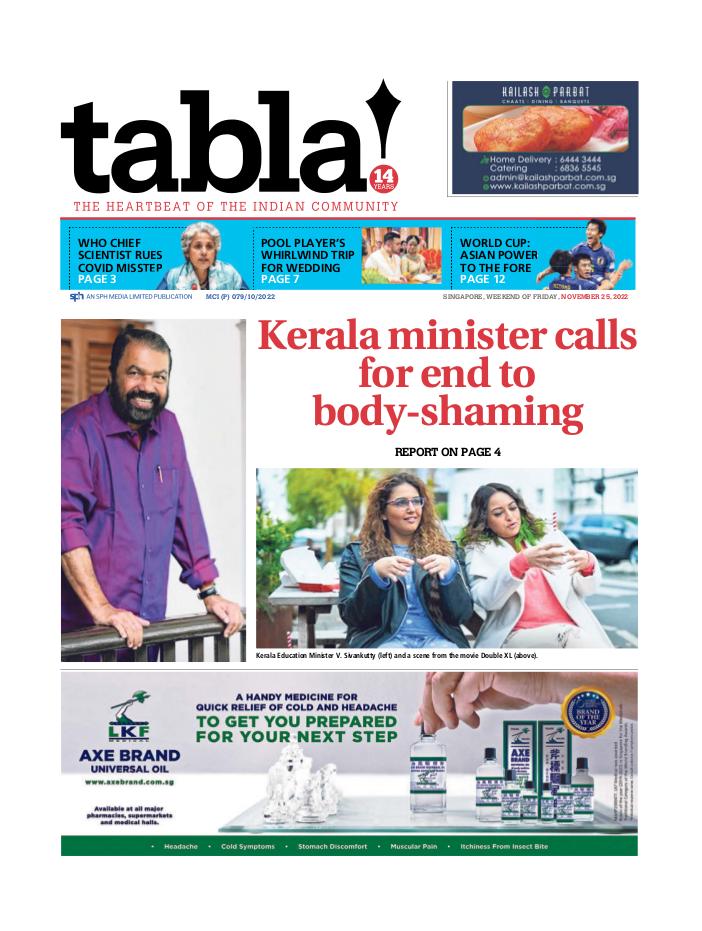 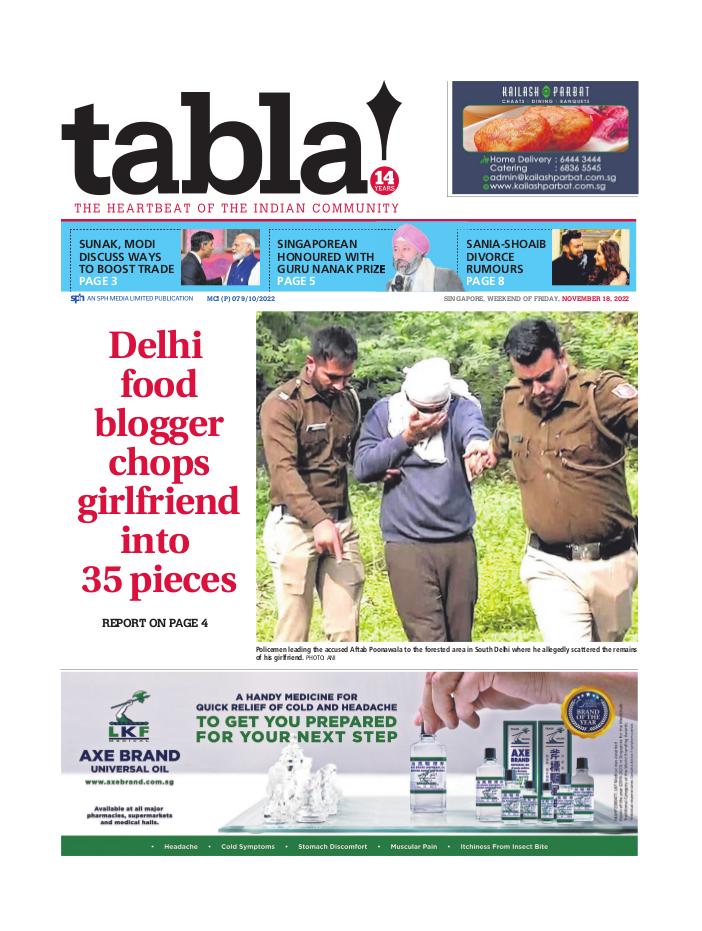 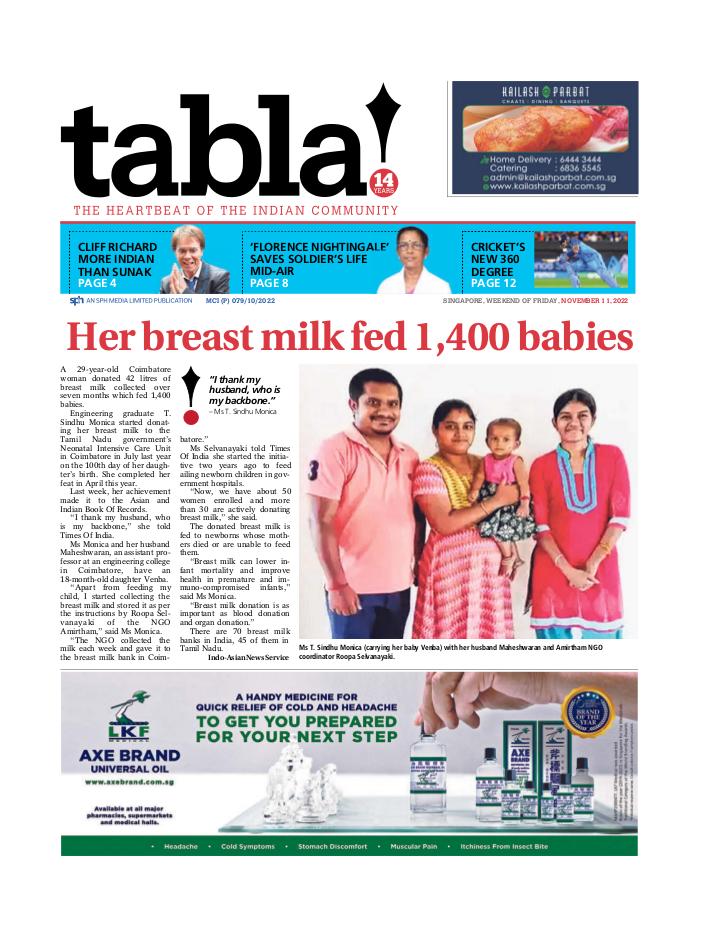 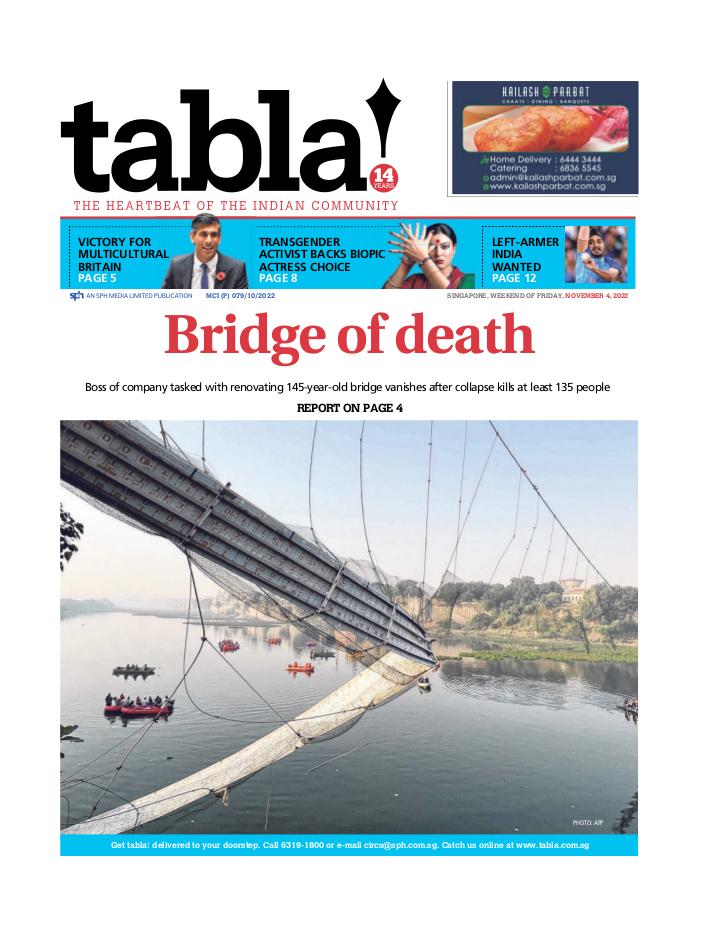