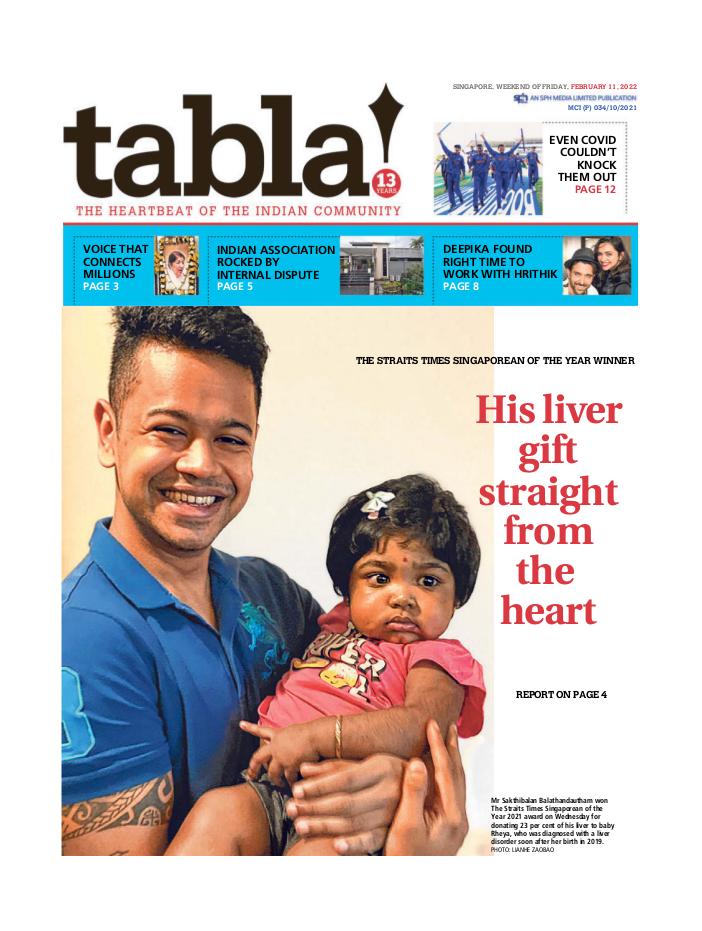 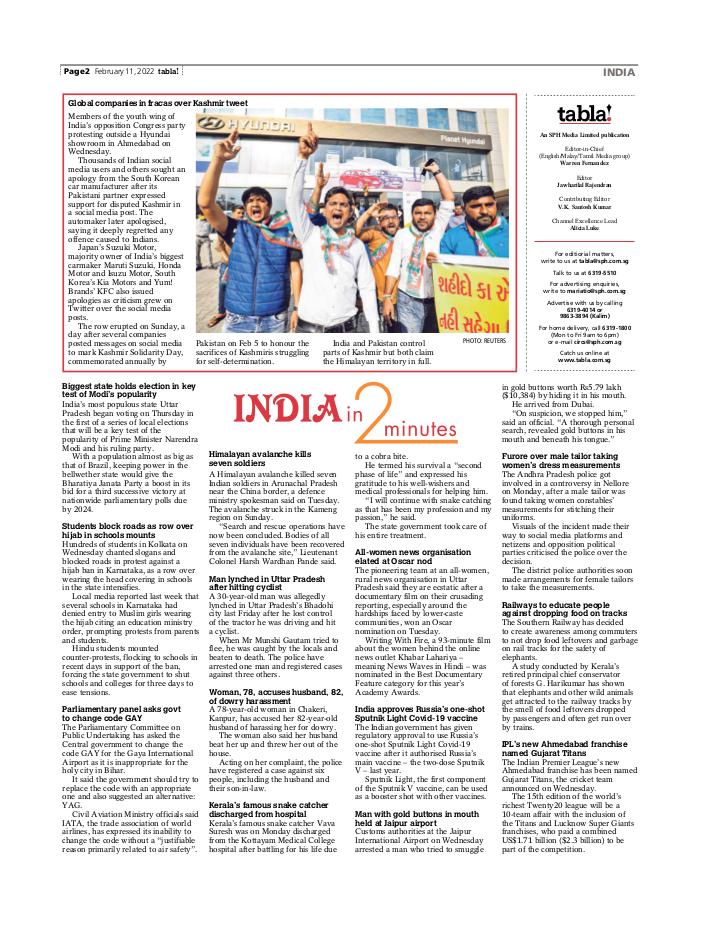 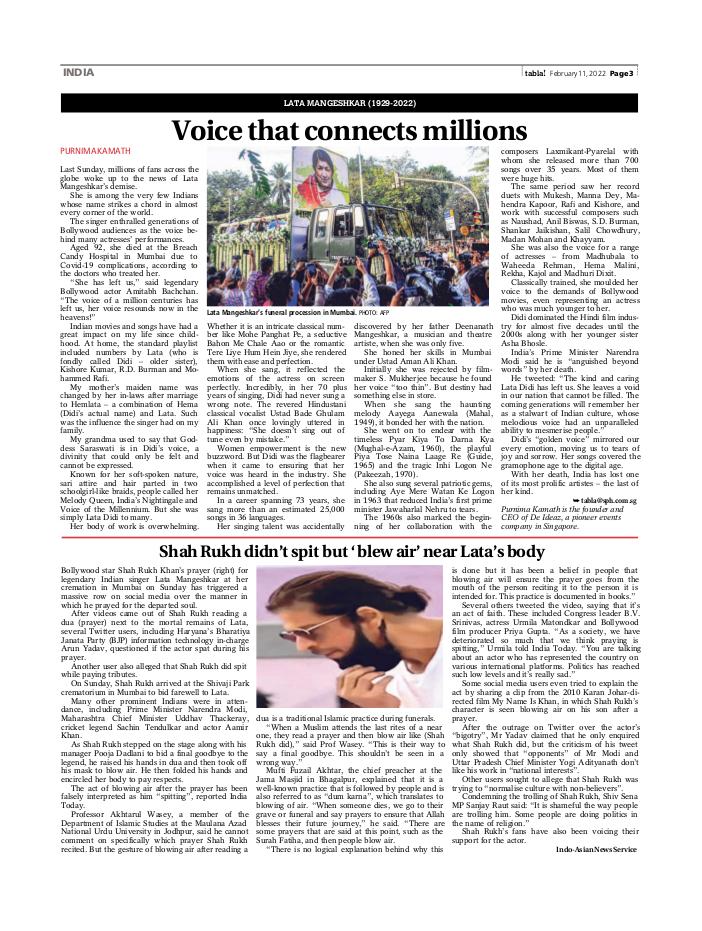 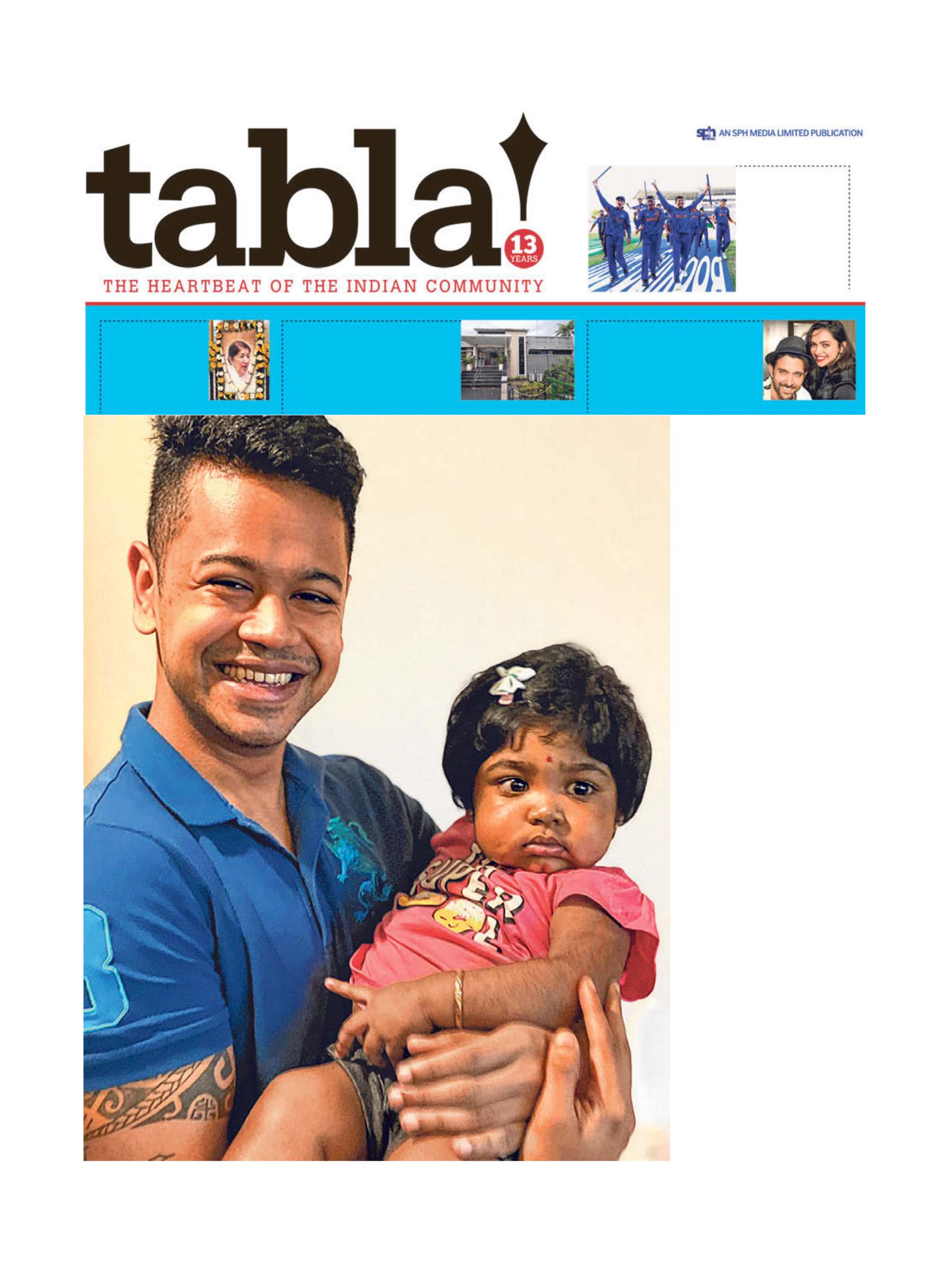 The Straits Times Singaporean of the

Year 2021 award on Wednesday for

donating 23 per cent of his liver to baby

Rheya, who was diagnosed with a liver

disorder soon after her birth in 2019.

THE STRAITS TIMES SINGAPOREAN OF THE YEAR WINNER 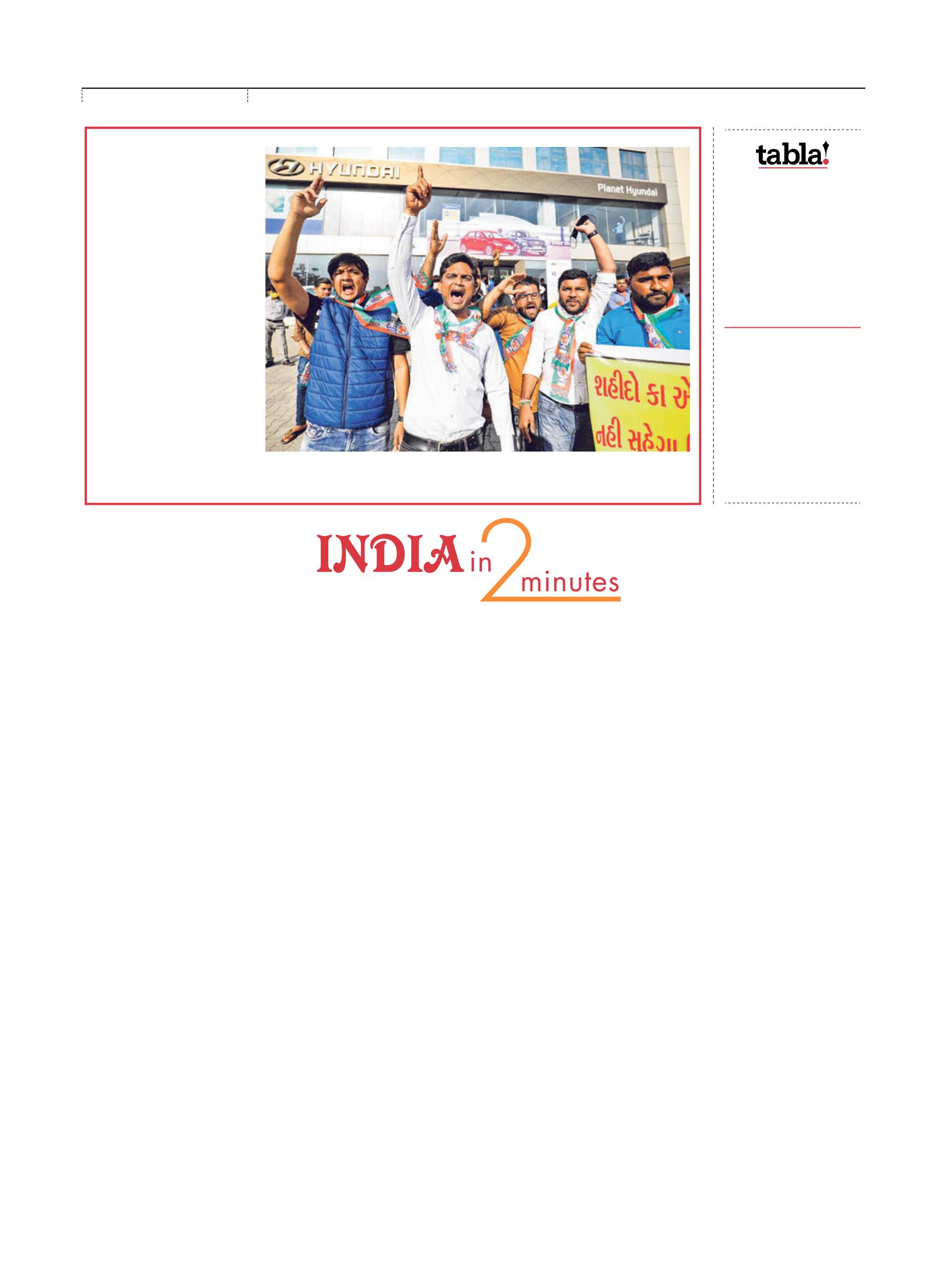 Pradesh began voting on Thursday in

the first of a series of local elections

that will be a key test of the

Modi and his ruling party.

With a population almost as big as

that of Brazil, keeping power in the

bellwether state would give the

Bharatiya Janata Party a boost in its

bid for a third successive victory at

Students block roads as row over

Hundreds of students in Kolkata on

blocked roads in protest against a

hijab ban in Karnataka, as a row over

wearing the head covering in schools

in the state intensifies.

several schools in Karnataka had

the hijab citing an education ministry

counter-protests, flocking to schools in

recent days in support of the ban,

forcing the state government to shut

schools and colleges for three days to

The Parliamentary Committee on

Public Undertaking has asked the

Central government to change the

code GAY for the Gaya International

Airport as it is inappropriate for the

It said the government should try to

replace the code with an appropriate

one and also suggested an alternative:

IATA, the trade association of world

airlines, has expressed its inability to

change the code without a “justifiable

near the China border, a defence

The avalanche struck in the Kameng

“Search and rescue operations have

now been concluded. Bodies of all

seven individuals have been recovered

from the avalanche site,” Lieutenant

A 30-year-old man was allegedly

of the tractor he was driving and hit

When Mr Munshi Gautam tried to

flee, he was caught by the locals and

beaten to death. The police have

arrested one man and registered cases

A 78-year-old woman in Chakeri,

Kanpur, has accused her 82-year-old

husband of harassing her for dowry.

The woman also said her husband

beat her up and threw her out of the

Acting on her complaint, the police

have registered a case against six

people, including the husband and

Suresh was on Monday discharged

from the Kottayam Medical College

hospital after battling for his life due

to a cobra bite.

He termed his survival a “second

phase of life” and expressed his

gratitude to his well-wishers and

medical professionals for helping him.

“I will continue with snake catching

as that has been my profession and my

The state government took care of

The pioneering team at an all-women,

Pradesh said they are ecstatic after a

documentary film on their crusading

reporting, especially around the

Writing With Fire, a 93-minute film

about the women behind the online

meaning News Waves in Hindi – was

nominated in the Best Documentary

Feature category for this year’s

The Indian government has given

regulatory approval to use Russia’s

vaccine after it authorised Russia’s

of the Sputnik V vaccine, can be used

as a booster shot with other vaccines.

Man with gold buttons in mouth

Customs authorities at the Jaipur

arrested a man who tried to smuggle

in gold buttons worth Rs5.79 lakh

He arrived from Dubai.

“On suspicion, we stopped him,”

said an official. “A thorough personal

search, revealed gold buttons in his

mouth and beneath his tongue.”

The Andhra Pradesh police got

involved in a controversy in Nellore

on Monday, after a male tailor was

measurements for stitching their

Visuals of the incident made their

way to social media platforms and

parties criticised the police over the

made arrangements for female tailors

to take the measurements.

against dropping food on tracks

The Southern Railway has decided

to create awareness among commuters

to not drop food leftovers and garbage

on rail tracks for the safety of

A study conducted by Kerala’s

of forests G. Harikumar has shown

that elephants and other wild animals

get attracted to the railway tracks by

the smell of food leftovers dropped

by passengers and often get run over

Ahmedabad franchise has been named

The 15th edition of the world’s

richest Twenty20 league will be a

10-team affair with the inclusion of

the Titans and Lucknow Super Giants

franchises, who paid a combined

part of the competition.

Members of the youth wing of

protesting outside a Hyundai

showroom in Ahmedabad on

media users and others sought an

apology from the South Korean

car manufacturer after its

support for disputed Kashmir in

saying it deeply regretted any

apologies as criticism grew on

The row erupted on Sunday, a

Pakistan on Feb 5 to honour the

parts of Kashmir but both claim

the Himalayan territory in full. 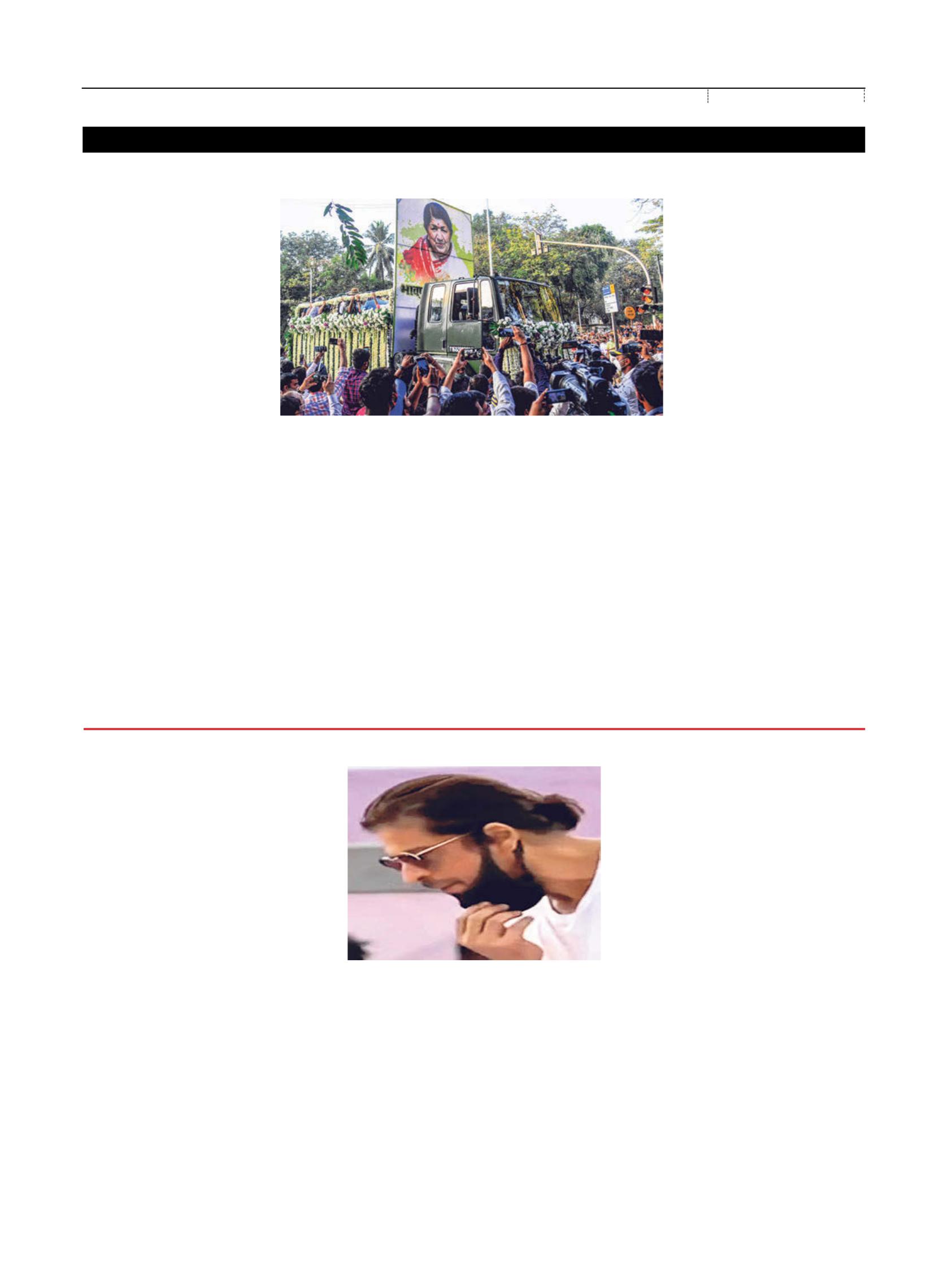 which he prayed for the departed soul.

Another user also alleged that Shah Rukh did spit

On Sunday, Shah Rukh arrived at the Shivaji Park

crematorium in Mumbai to bid farewell to Lata.

As Shah Rukh stepped on the stage along with his

manager Pooja Dadlani to bid a final goodbye to the

legend, he raised his hands in dua and then took off

encircled her body to pay respects.

Department  of  Islamic  Studies  at the   Maulana  Azad

recited. But the gesture of blowing air after reading a

dua is a traditional Islamic practice during funerals.

one, they read a prayer and then blow air like (Shah

well-known practice that is followed by people and is

also referred to  as  “dum  karna”, which  translates to

grave or funeral and say prayers to ensure that Allah

intended for. This practice is documented in books.”

Some social media users even tried to explain the

rected film My Name Is Khan, in which Shah Rukh’s

trying to “normalise culture with non-believers”.

MP Sanjay Raut said: “It is shameful the way people

the name of religion.”

support for the actor.

Last Sunday, millions of fans across the

every corner of the world.

The  singer  enthralled  generations  of

the doctors who treated her.

Indian movies and songs have had a

was the influence the singer had on my

simply Lata Didi to many.

Whether it is an intricate classical num-

them with ease and perfection.

years of singing, Didi had never sung a

tune even by mistake.”

buzzword. But Didi was the flagbearer

accomplished a  level of perfection that

Her   singing   talent   was   accidentally

discovered   by   her   father   Deenanath

artiste, when she was only five.

something else in store.

in 1963 that reduced India’s first prime

work   with   successful   composers   such

Classically trained, she moulded her

movies,   even   representing   an   actress

who was much younger to her.

words” by her death.

Lata Didi has left us. She leaves a void

in our nation that cannot be filled. The

coming   generations   will   remember   her

melodious   voice   had   an   unparalleled

gramophone age to the digital age.

of its most prolific artistes – the last of

Purnima Kamath is the founder and 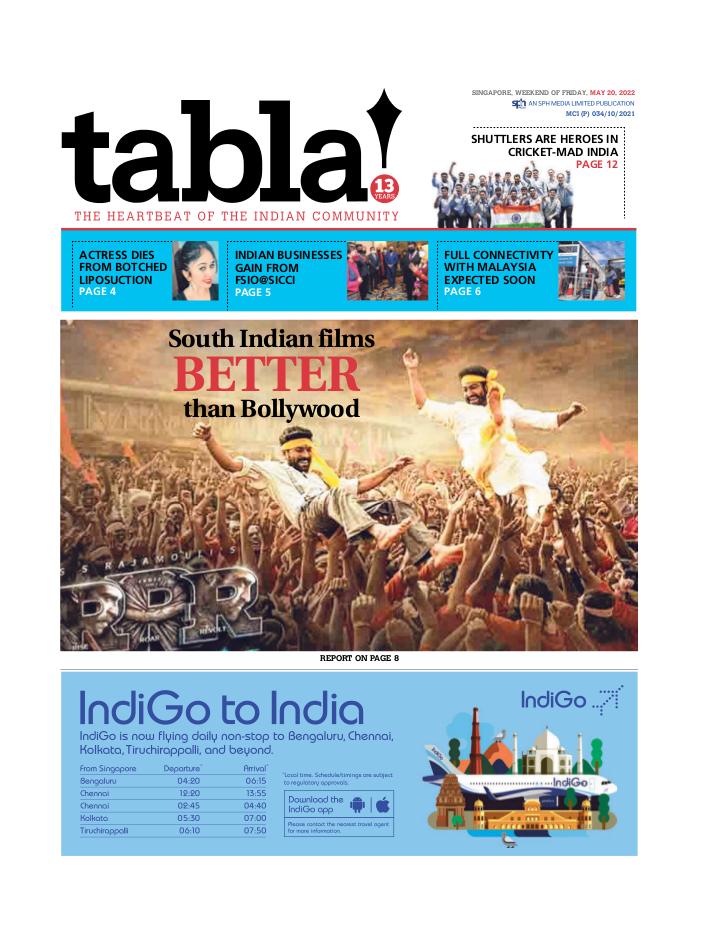 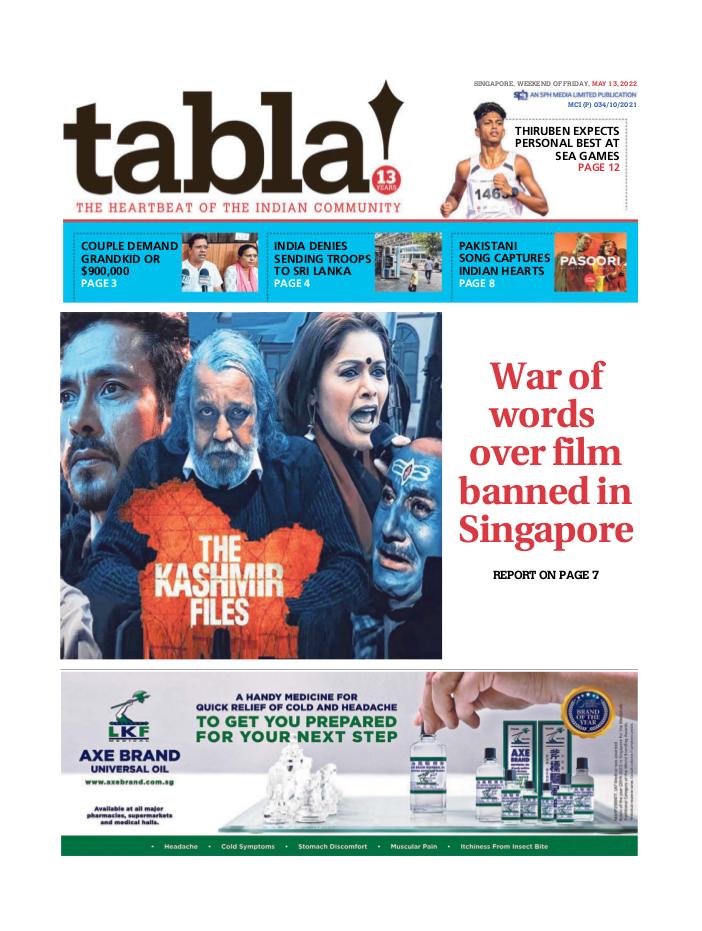 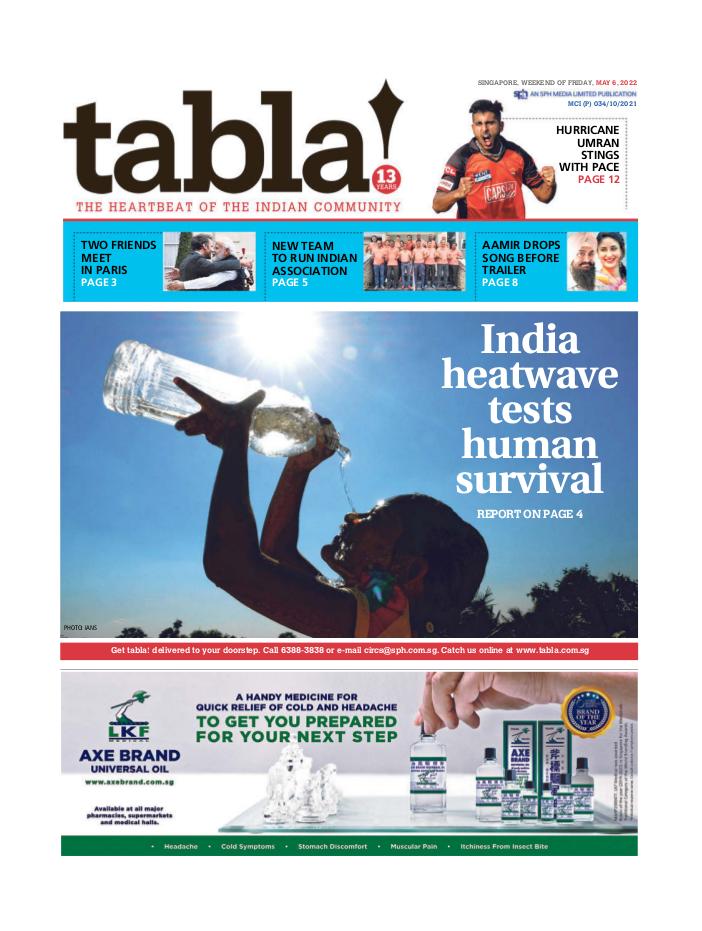 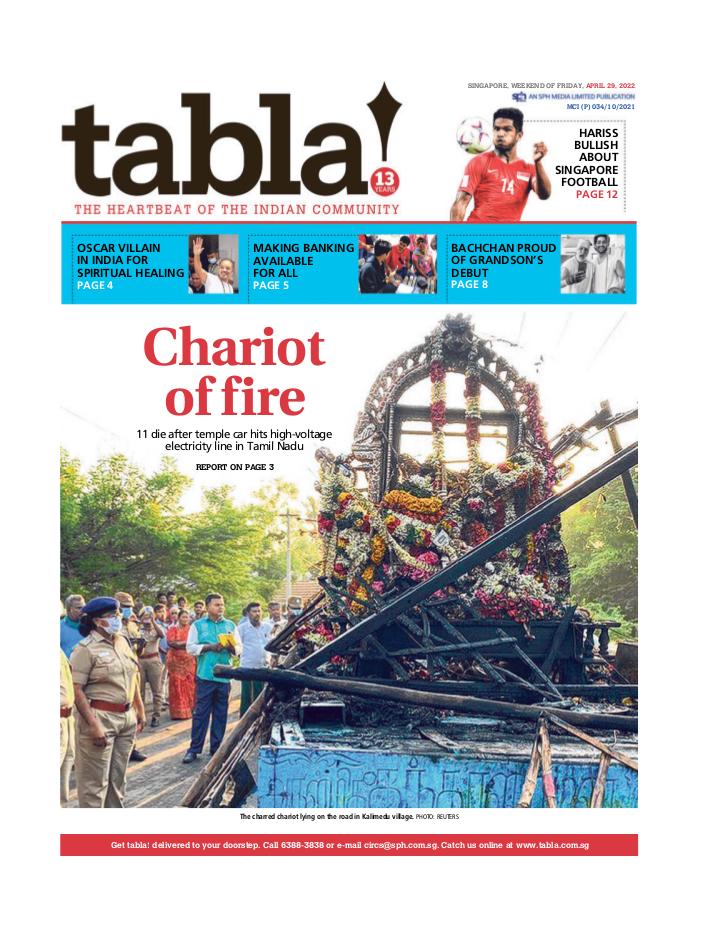 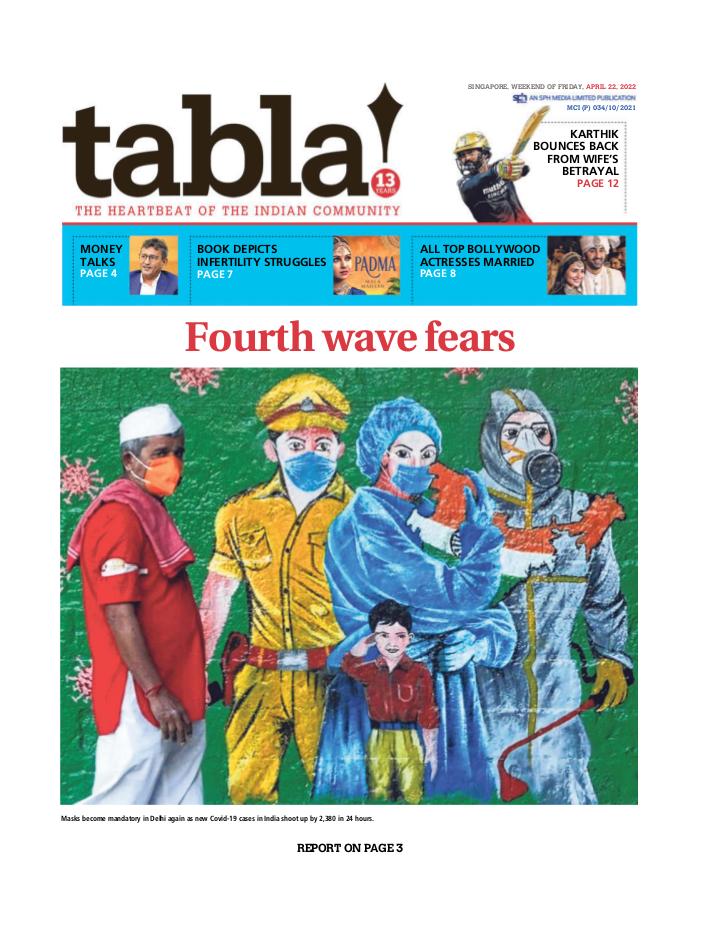 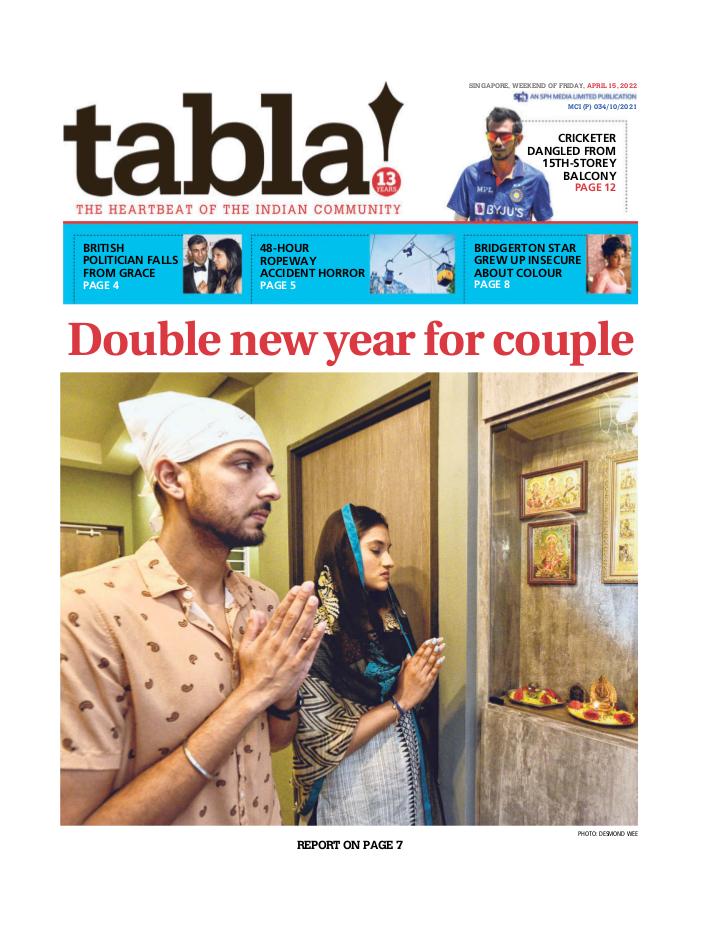 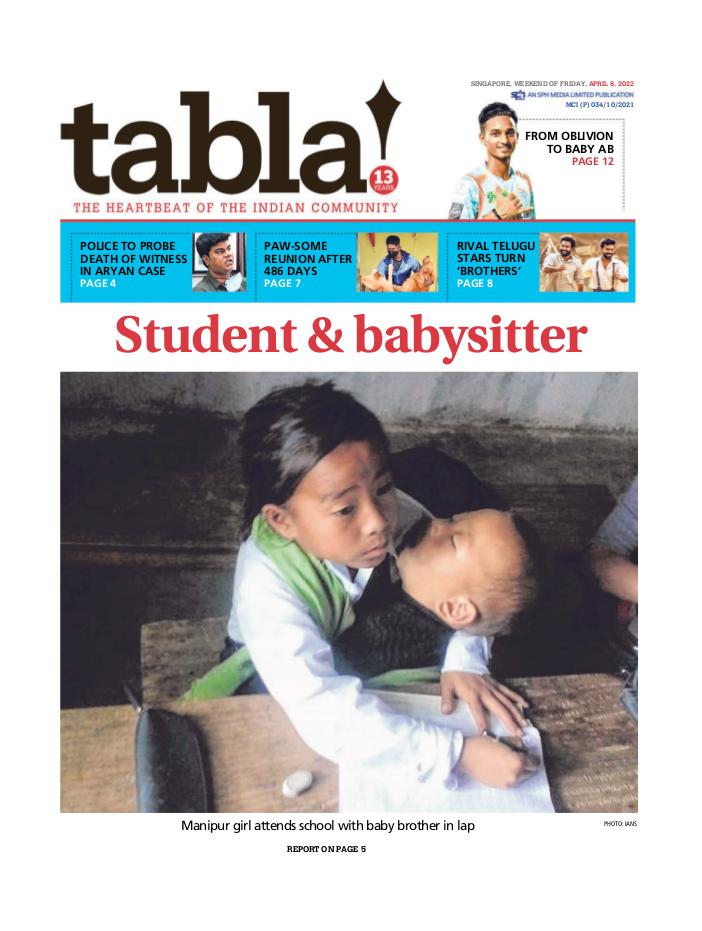 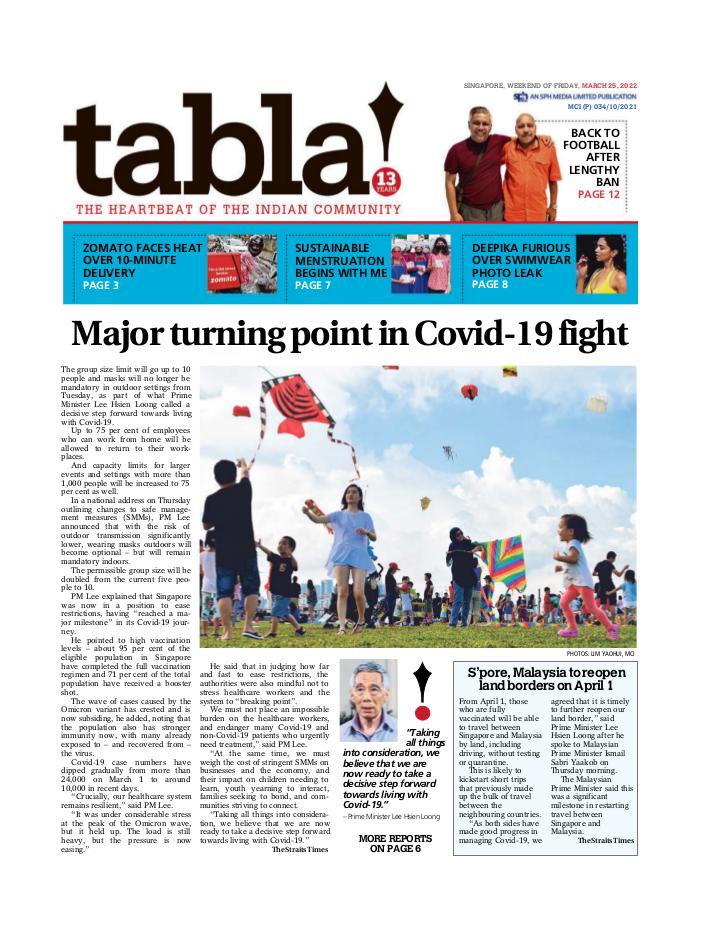 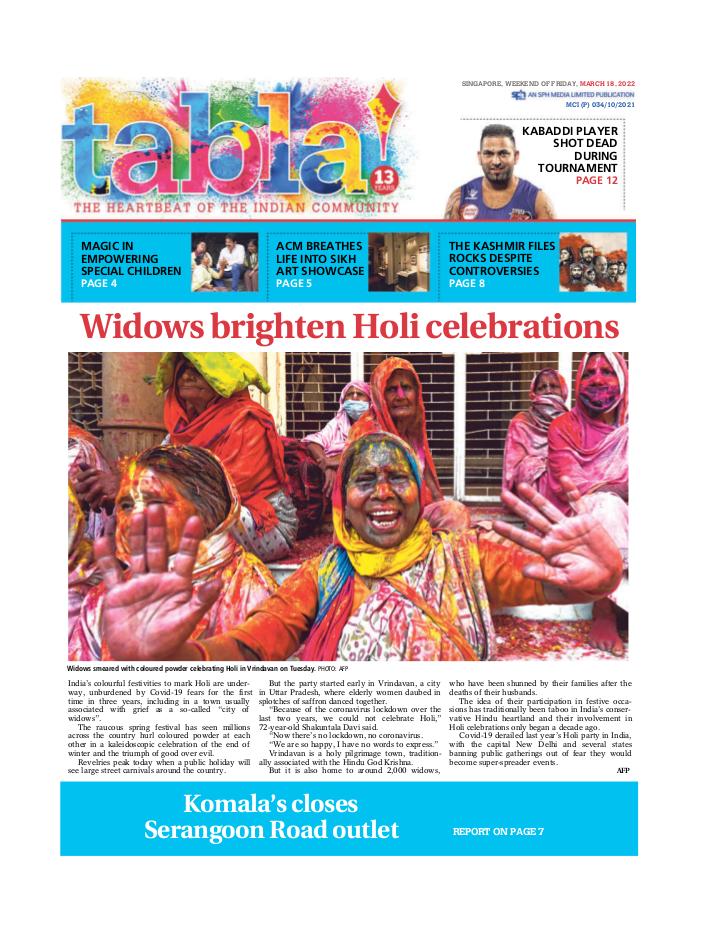 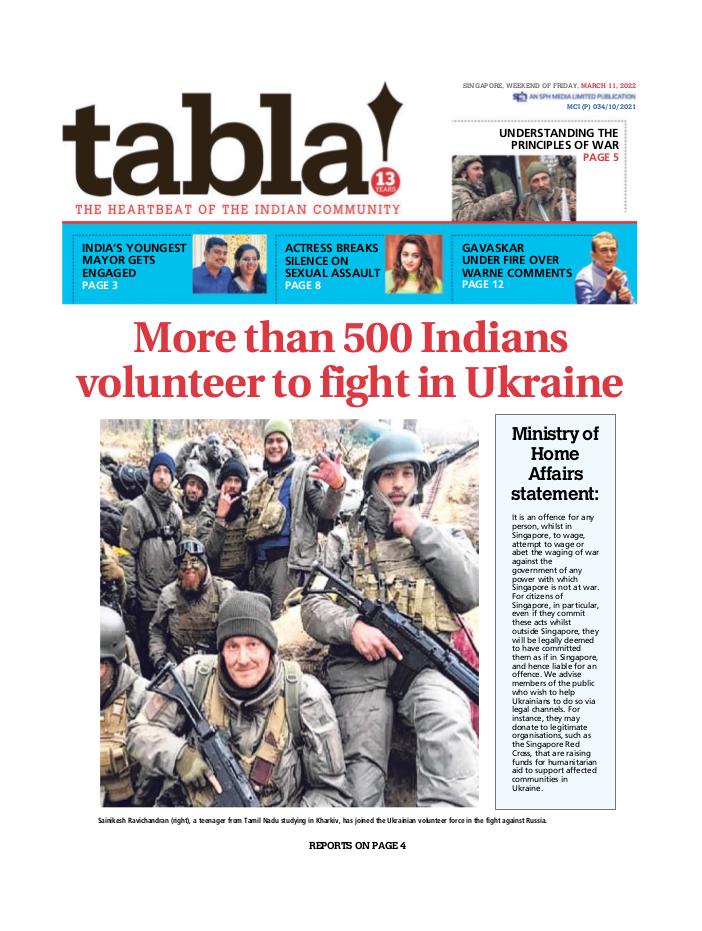 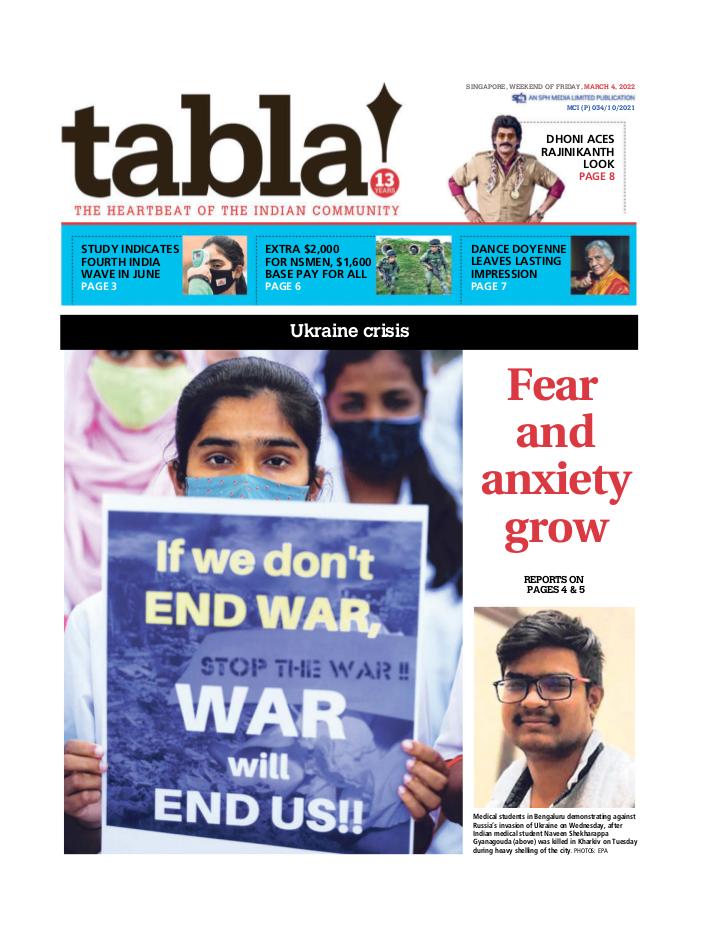 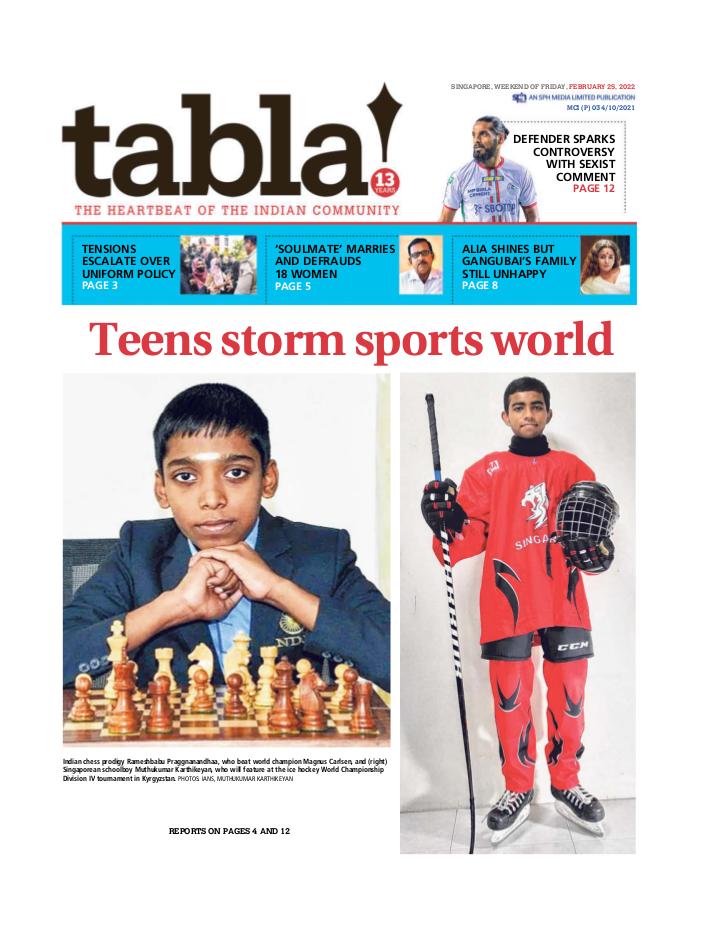 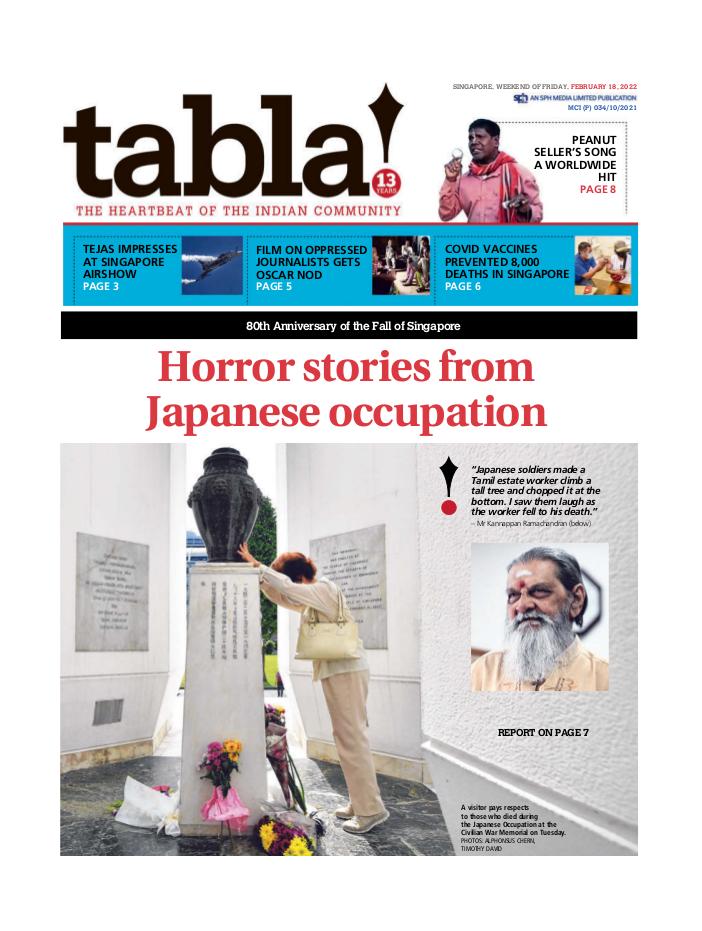