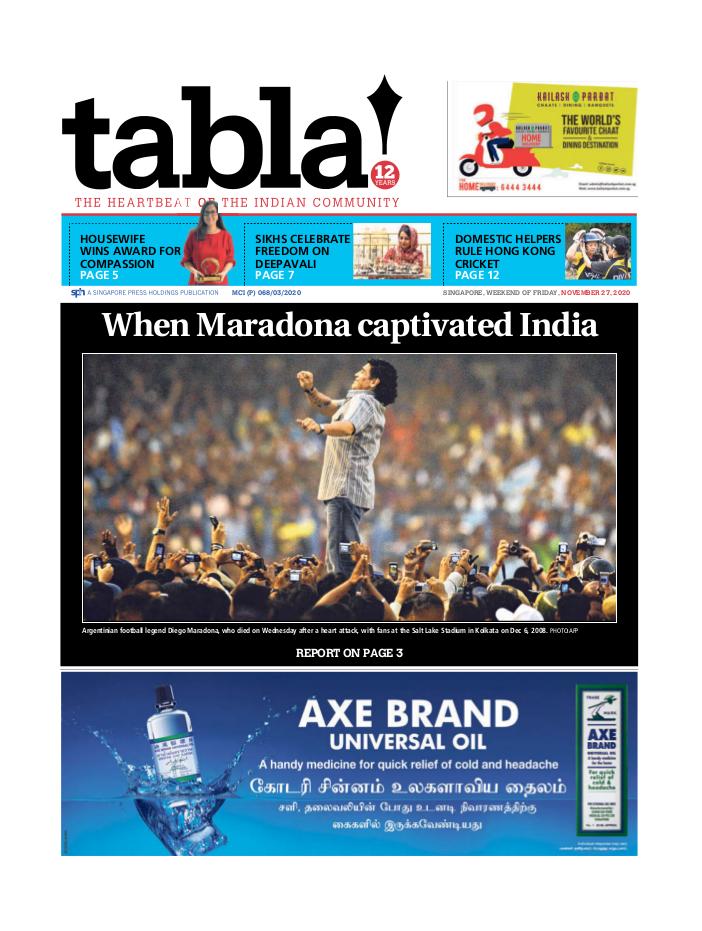 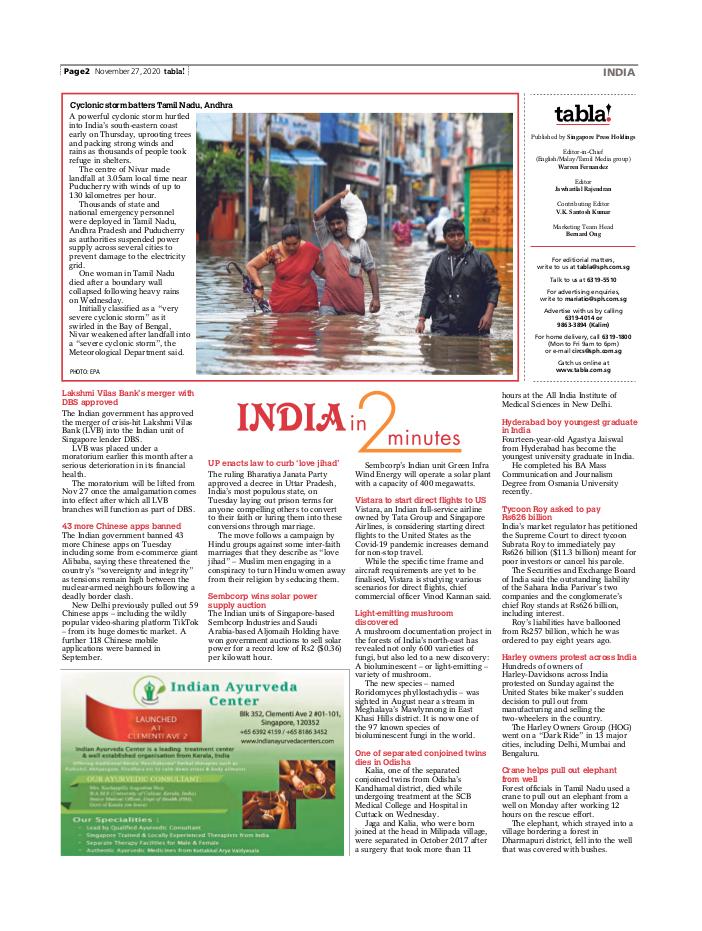 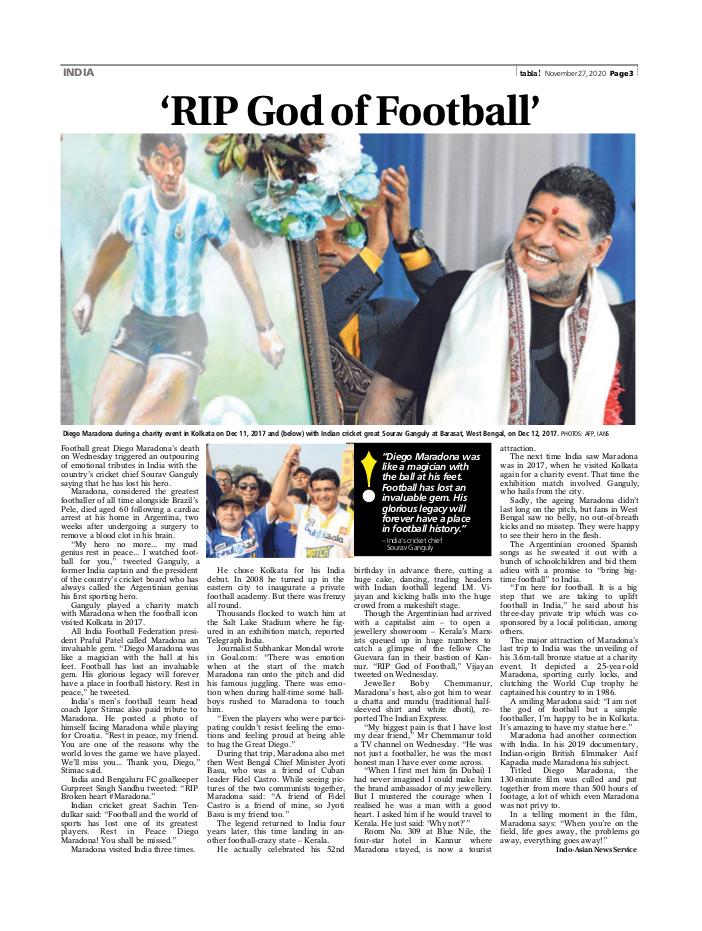 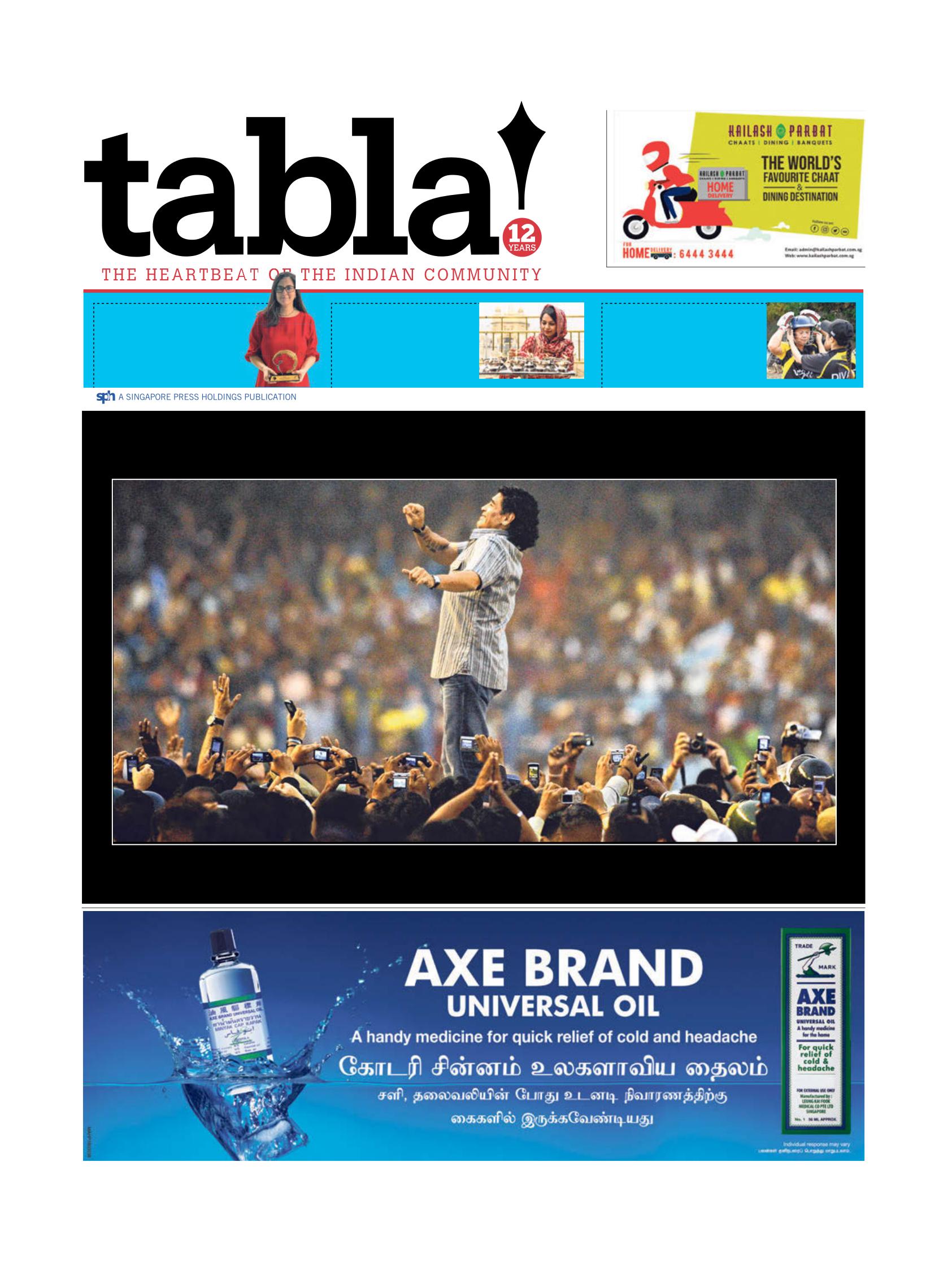 Argentinian football legend Diego Maradona, who died on Wednesday after a heart attack, with fans at the Salt Lake Stadium in Kolkata on Dec 6, 2008. 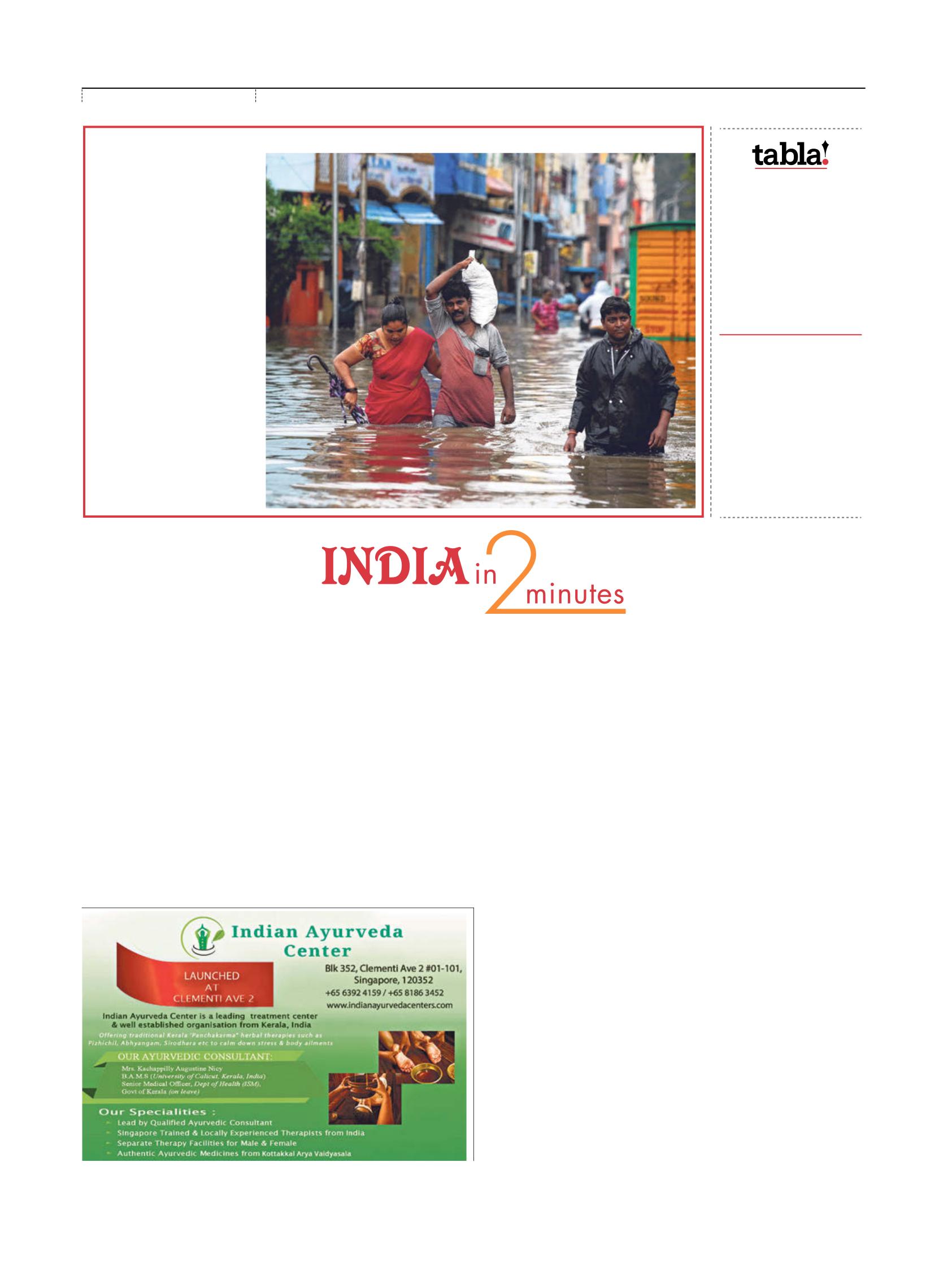 The Indian government has approved

the merger of crisis-hit Lakshmi Vilas

Bank (LVB) into the Indian unit of

LVB was placed under a

moratorium earlier this month after a

serious deterioration in its financial

The moratorium will be lifted from

Nov 27 once the amalgamation comes

into effect after which all LVB

branches will function as part of DBS.

including some from e-commerce giant

Alibaba, saying these threatened the

as tensions remain high between the

Chinese apps – including the wildly

– from its huge domestic market. A

applications were banned in

approved a decree in Uttar Pradesh,

India’s most populous state, on

anyone compelling others to convert

to their faith or luring them into these

The move follows a campaign by

Hindu groups against some inter-faith

marriages that they describe as “love

jihad” – Muslim men engaging in a

conspiracy to turn Hindu women away

from their religion by seducing them.

The Indian units of Singapore-based

with a capacity of 400 megawatts.

Vistara to start direct flights to US

owned by Tata Group and Singapore

flights to the United States as the

While the specific time frame and

aircraft requirements are yet to be

A mushroom documentation project in

the forests of India’s north-east has

revealed not only 600 varieties of

fungi, but also led to a new discovery:

A bioluminescent – or light-emitting –

sighted in August near a stream in

Khasi Hills district. It is now one of

the 97 known species of

bioluminescent fungi in the world.

One of separated conjoined twins

Kalia, one of the separated

undergoing treatment at the SCB

Medical College and Hospital in

Jaga and Kalia, who were born

joined at the head in Milipada village,

were separated in October 2017 after

a surgery that took more than 11

hours at the All India Institute of

from Hyderabad has become the

He completed his BA Mass

the Supreme Court to direct tycoon

poor investors or cancel his parole.

The Securities and Exchange Board

of India said the outstanding liability

of the Sahara India Parivar’s two

companies and the conglomerate’s

from Rs257 billion, which he was

ordered to pay eight years ago.

Hundreds of owners of

protested on Sunday against the

decision to pull out from

manufacturing and selling the

two-wheelers in the country.

cities, including Delhi, Mumbai and

crane to pull out an elephant from a

well on Monday after working 12

hours on the rescue effort.

The elephant, which strayed into a

village bordering a forest in

Dharmapuri district, fell into the well

that was covered with bushes.

and packing strong winds and

rains as thousands of people took

The centre of Nivar made

landfall at 3.05am local time near

Puducherry with winds of up to

Thousands of state and

were deployed in Tamil Nadu,

supply across several cities to

prevent damage to the electricity

One woman in Tamil Nadu

died after a boundary wall

Initially classified as a “very

severe cyclonic storm” as it

swirled in the Bay of Bengal,

Nivar weakened after landfall into

a “severe cyclonic storm”, the 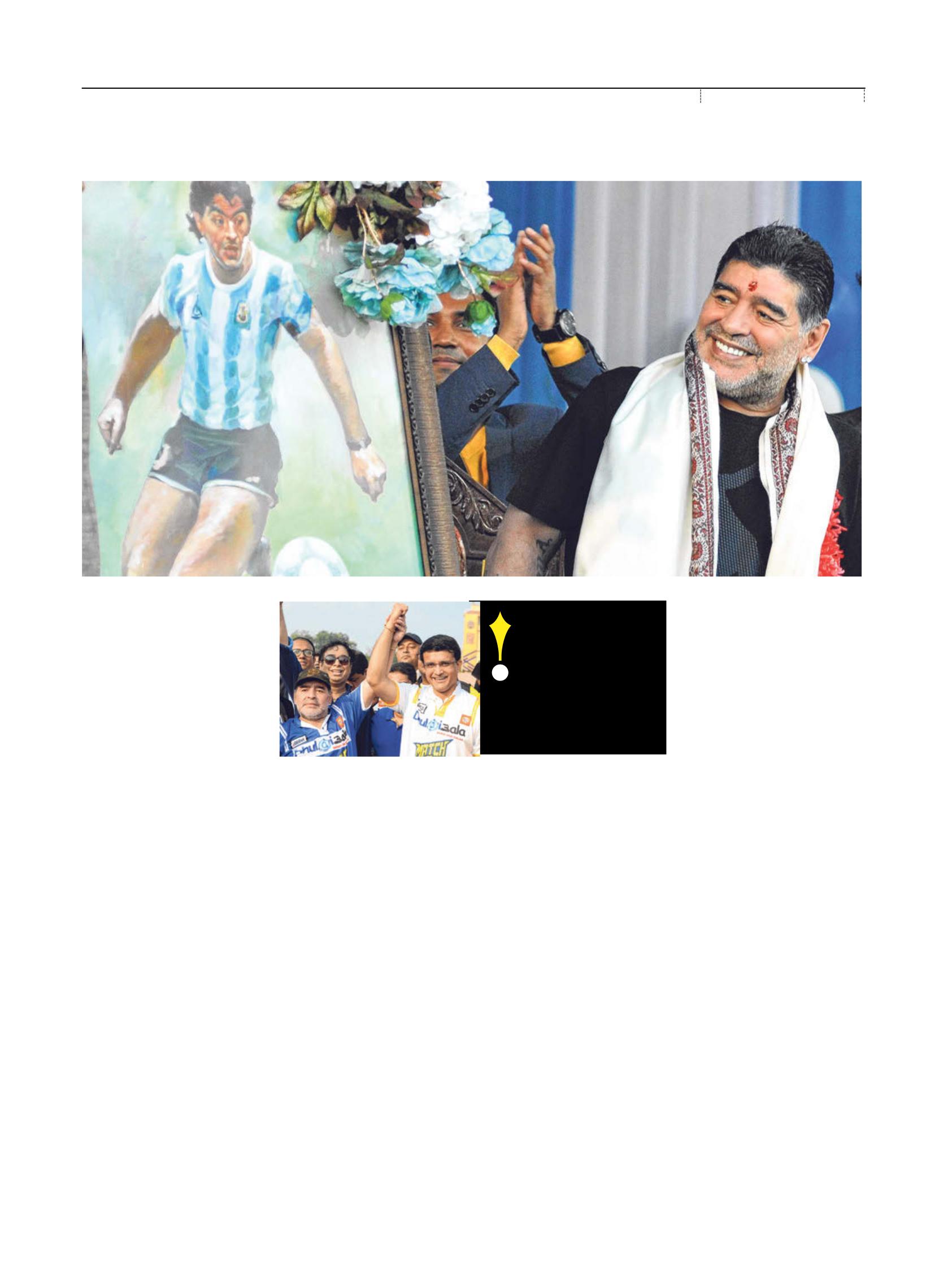 Diego Maradona during a charity event in Kolkata on Dec 11, 2017 and (below) with Indian cricket great Sourav Ganguly at Barasat, West Bengal, on Dec 12, 2017.

on Wednesday triggered an outpouring

of emotional tributes in India with the

saying that he has lost his hero.

footballer of all time alongside Brazil’s

arrest at his home in Argentina, two

weeks after undergoing a surgery to

remove a blood clot in his brain.

former India captain and the president

of the country’s cricket board who has

with Maradona when the football icon

feet. Football has lost an invaluable

gem. His glorious legacy will forever

have a place in football history. Rest in

himself facing Maradona while playing

for Croatia. “Rest in peace, my friend.

You are one of the reasons why the

world loves the game we have played.

dulkar said: “Football and the world of

Maradona! You shall be missed.”

football academy. But there was frenzy

Thousands flocked to watch him at

the Salt Lake Stadium where he fig-

ured in an exhibition match, reported

Maradona ran onto the pitch and did

his famous juggling. There was emo-

tion when during half-time some ball-

“Even the players who were partici-

tions and feeling proud at being able

to hug the Great Diego.”

During that trip, Maradona also met

tures of the two communists together,

Castro is a friend of mine, so Jyoti

Basu is my friend too.”

The legend returned to India four

years later, this time landing in an-

birthday in advance there, cutting a

jayan and kicking balls into the huge

crowd from a makeshift stage.

Though the Argentinian had arrived

ists queued up in huge numbers to

Guevara fan in their bastion of Kan-

Maradona’s host, also got him to wear

a chatta and mundu (traditional half-

“My biggest pain is that I have lost

a TV channel on Wednesday. “He was

not just a footballer, he was the most

honest man I have ever come across.

“When I first met him (in Dubai) I

had never imagined I could make him

the brand ambassador of my jewellery.

But I mustered the courage when I

realised he was a man with a good

heart. I asked him if he would travel to

The next time India saw Maradona

again for a charity event. That time the

who hails from the city.

last long on the pitch, but fans in West

Bengal saw no belly, no out-of-breath

kicks and no misstep. They were happy

to see their hero in the flesh.

bunch of schoolchildren and bid them

adieu with a promise to “bring big-

“I’m here for football. It is a big

football in India,” he said about his

three-day private trip which was co-

sponsored by a local politician, among

The major attraction of Maradona’s

last trip to India was the unveiling of

his 3.6m-tall bronze statue at a charity

A smiling Maradona said: “I am not

footballer, I’m happy to be in Kolkata.

It’s amazing to have my statue here.”

Maradona had another connection

Kapadia made Maradona his subject.

130-minute film was culled and put

together from more than 500 hours of

footage, a lot of which even Maradona

was not privy to.

Maradona says: “When you’re on the

away, everything goes away!”

the ball at his feet.

Football has lost an

forever have a place 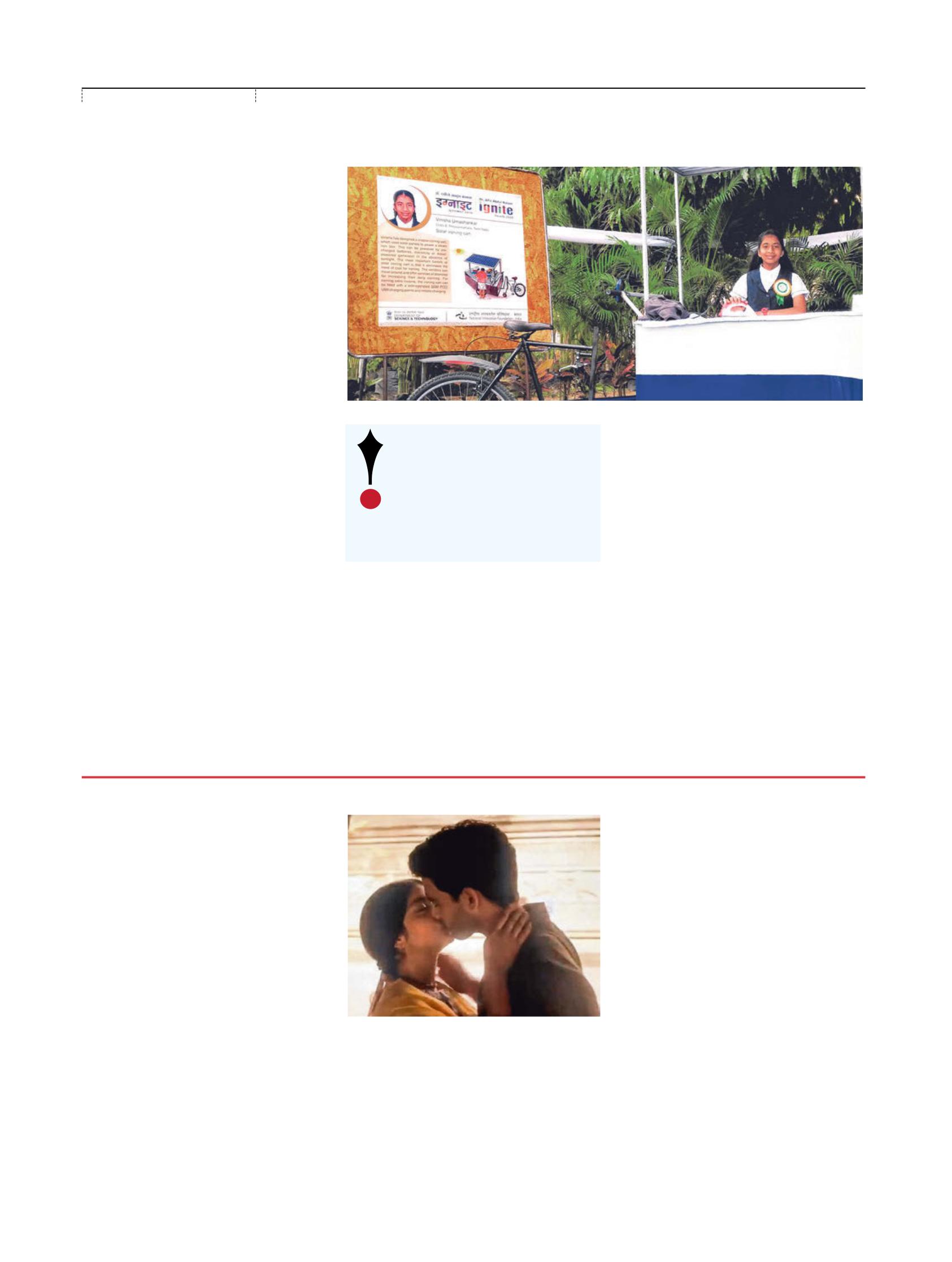 On India’s residential streets, amid the tea vendors

each day for millions, smoothing out wrinkles with

But the country’s 10 million ironing carts and

shops take a hefty toll on the forests. Each uses, on

average, more than 5kg of charcoal each day, the

Now, however, a 14-year-old girl, troubled by the

heaps of used charcoal left by her local ironing

vendor and by his painful wheeze from pollution,

“I calculated the enormous quantity of charcoal

health. I wanted to create a renewable resource to

her hometown of Tiruvannamalai in Tamil Nadu.

Last week, her innovation was recognised with

the Children’s Climate Prize for its contributions to

cleaner air. The prize, backed by a Swedish energy

It is just one of several national and international

Panels on the cart’s roof produce solar power that

between customers or stored in four batteries.

When fully charged – which takes just under five

hours in bright sunshine – each battery can power

the iron for six hours, providing power on cloudy

days. The cart can also run on grid electricity or a

generator in a pinch. To boost earnings for ironing

vendors, the carts are also equipped with a mobile

Vinisha hopes the cart – which she developed

over six months – will improve incomes and health

for ironing vendors and offer them “a dignified life”.

It could also be used in other developing countries.

The cart is easy to operate – the system takes 15

minutes to learn – and she plans to produce online

videos to help those who speak other languages

understand how to use it.

sunny nations such as India, where some parts of the

While Vinisha developed the detailed design, the

and tested last December by the National Innova-

partment of Science and Technology.

The foundation has also applied for a patent on

scientist Marie Curie as a role model, said the cart

could save “countless number of trees”.

mature trees are most likely to be logged as they

“What’s the point of planting trees if we can’t

switch to her device if it is cost-effective.

Charcoal for  two  days  of  ironing  costs  about

are built to last at least eight years.

She hopes to use her prize money to develop a

efficiency. “In the long run my innovation will not

only work out cheaper for vendors but help the

environment too,” she said.

one of the members of the jury for the Children’s

tors were “coming at the challenge with all the

smarts, passion and energy that is needed to change

the future to the one we all need”.

talked about how it was cooler and seasons were

more predictable when they were younger, while she

and others have noticed increasing heat and pollu-

“This generation wants normal weather, which

also will reduce droughts and floods. That is one

reason why we take so much interest in climate

Vinisha Umashankar with the solar iron she developed.

Police in Madhya Pradesh have filed a case against

sentiments, after a member of India’s ruling party

objected to scenes in the web series A Suitable Boy,

in which a Hindu girl kisses a Muslim boy against

the backdrop of a Hindu temple.

The series is based on an English novel by one of

young girl’s quest for a husband.

It is directed by celebrated Indian filmmaker Mira

“It has extremely objectionable scenes that have

“On the basis of a complaint by (the national

Gaurav Tiwari, an FIR has been registered under

religious feelings) of the Indian Penal Code (IPC) in

Ms Shergill is the vice-president of Netflix India

while Ms Khurana is the director of public policy at

“I’ve directed police officers to get this controver-

can be taken against the producer-director of the

Mr Tiwari, a leader of the youth wing of India’s

protests by Hindus if the series is not taken off the

“Kissing scenes (filmed) inside a temple of Lord

Maheshwar (at a historic town located on the banks

of Narmada) have hurt sentiments of Hindus. This is

“Love jihad” is a term used by Hindu nationalists

who accuse  Muslims of  luring Hindu  women to

marry them and forcing them to convert to Islam to

the police complaint. The series’ writer and crew

that she is used to trolling.

when it involves any depiction of Hindu-Muslim

boycott of Netflix, which sees India as one of its

most promising growth markets but where its shows

withdrew   a   jewellery   advertisement   featuring   a

Netflix is not likely to face serious legal trouble,

experts said. But the campaign puts pressure on the

streaming service at a time when the government is

Earlier this month, the Indian government an-

“I calculated the enormous

quantity of charcoal being used,

the pollution from it that worsens

Earth and human health. I

wanted to create a renewable 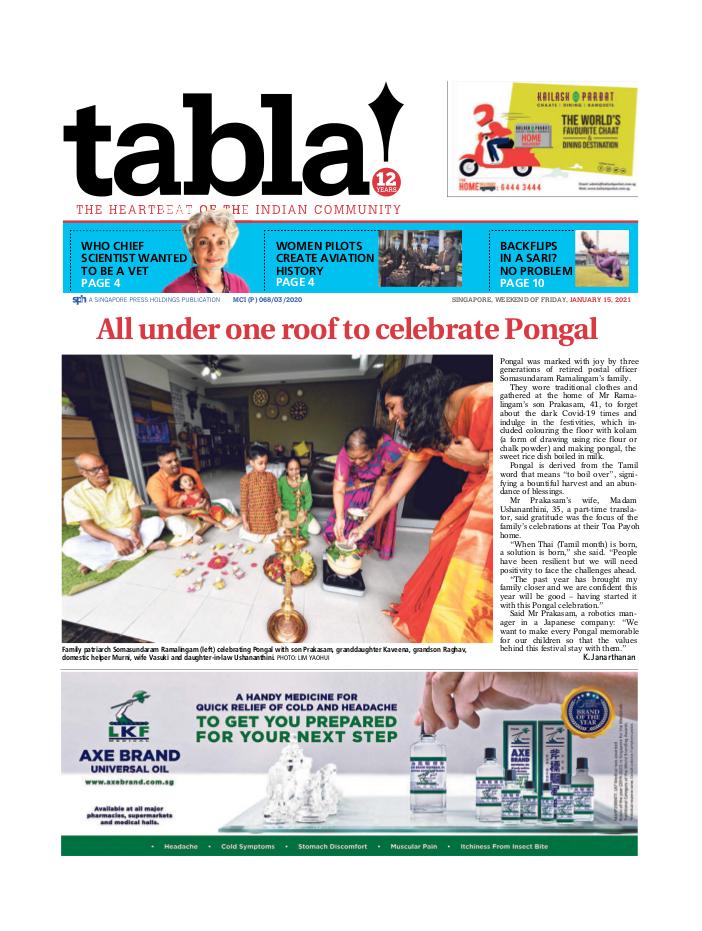 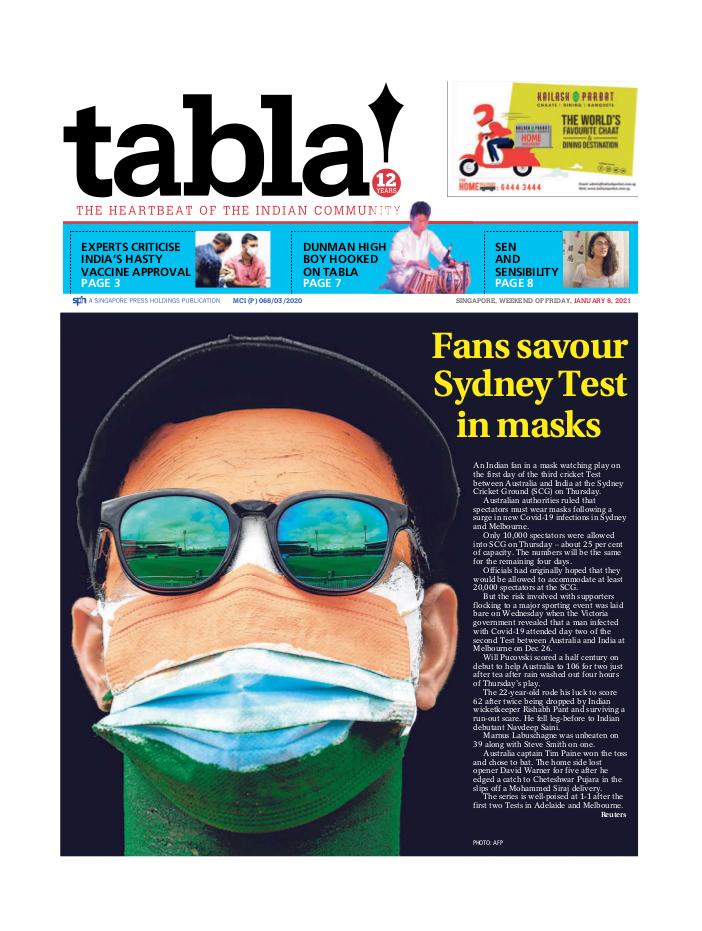 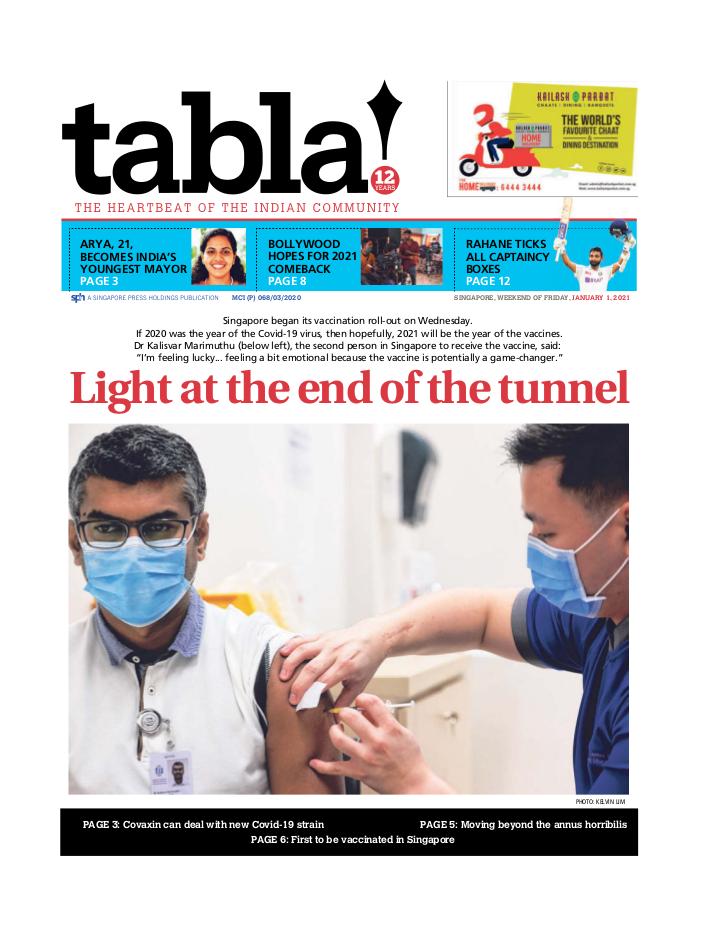 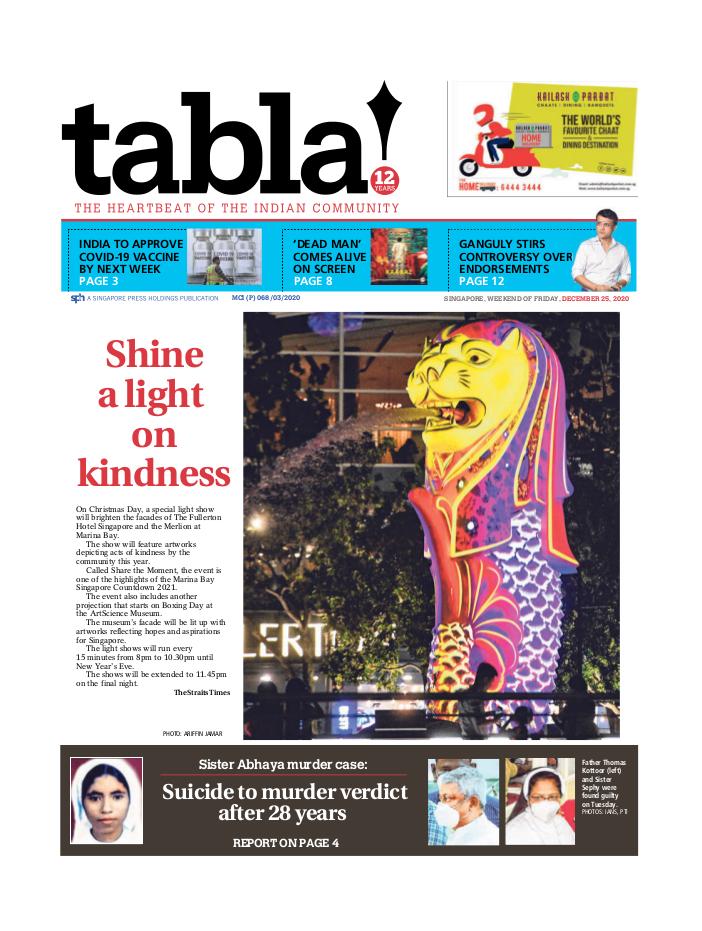