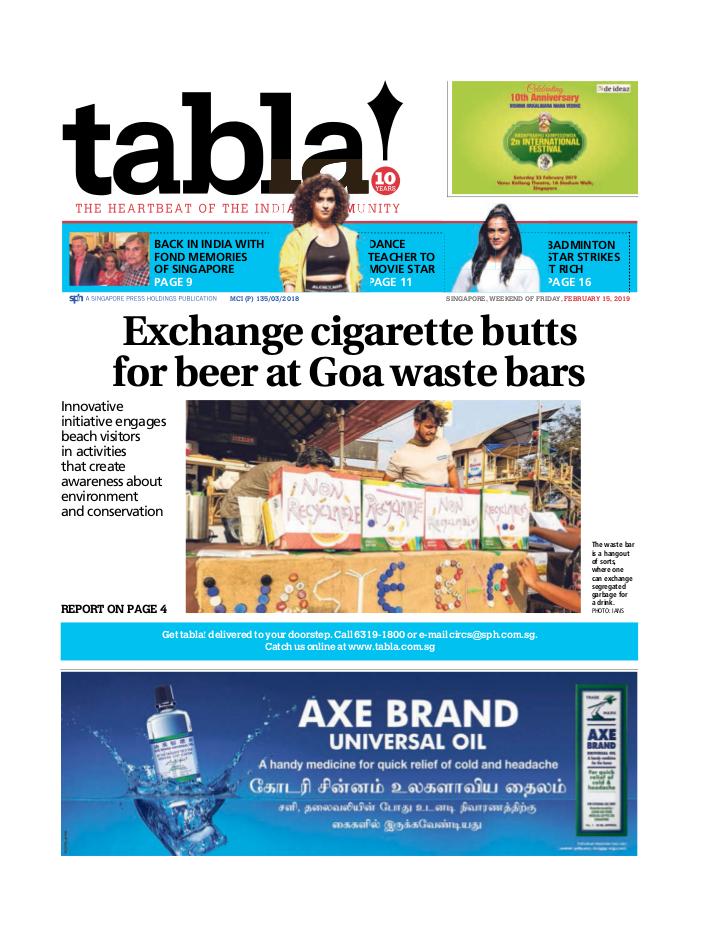 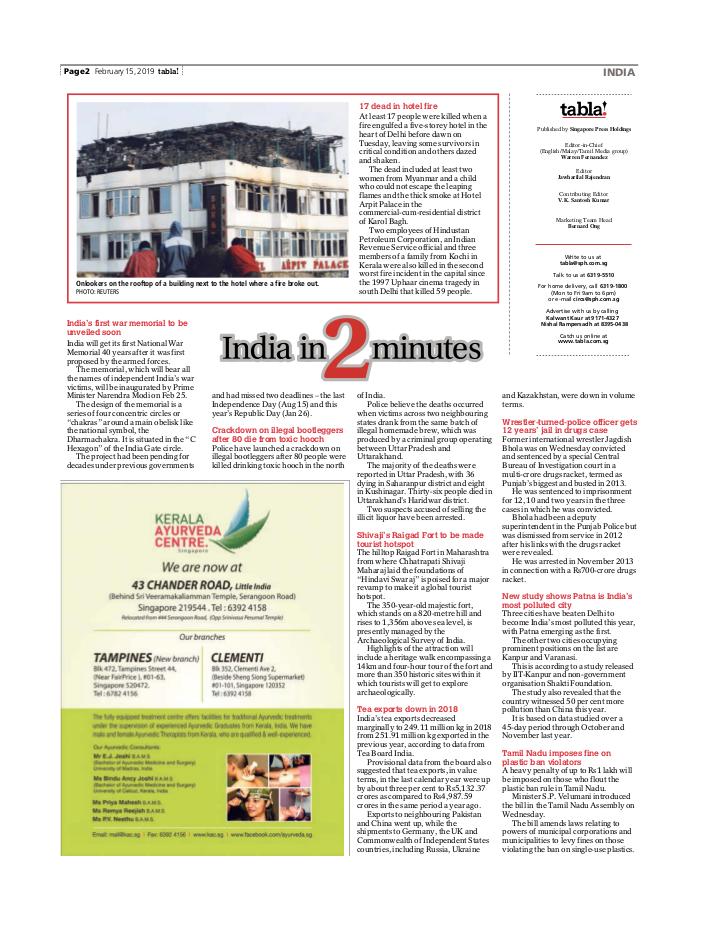 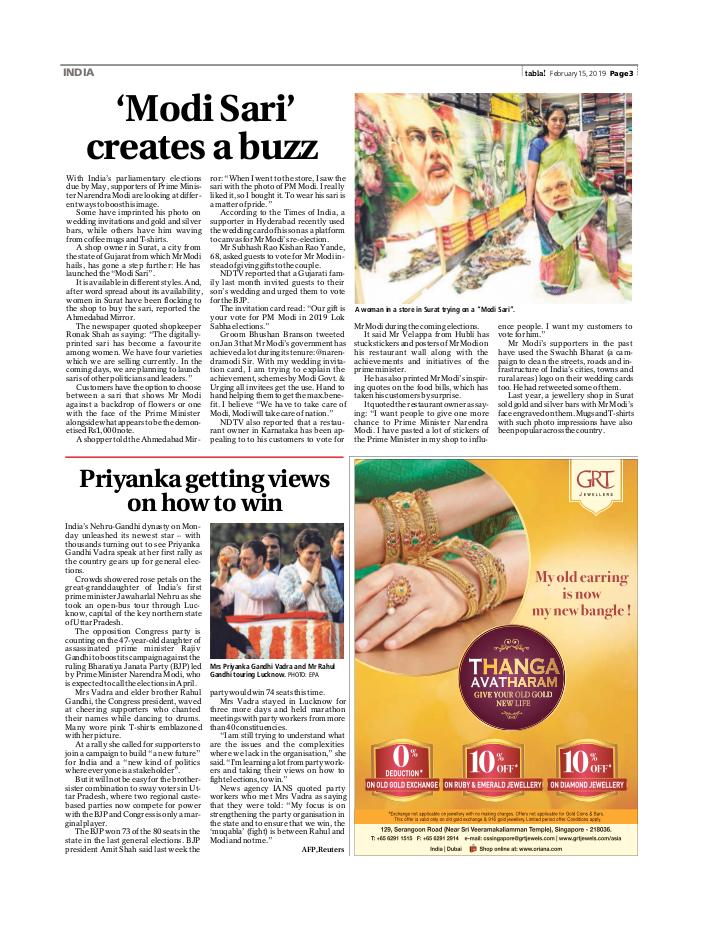 Catch us online at www.tabla.com.sg

BACK IN INDIA WITH

for beer at Goa waste bars 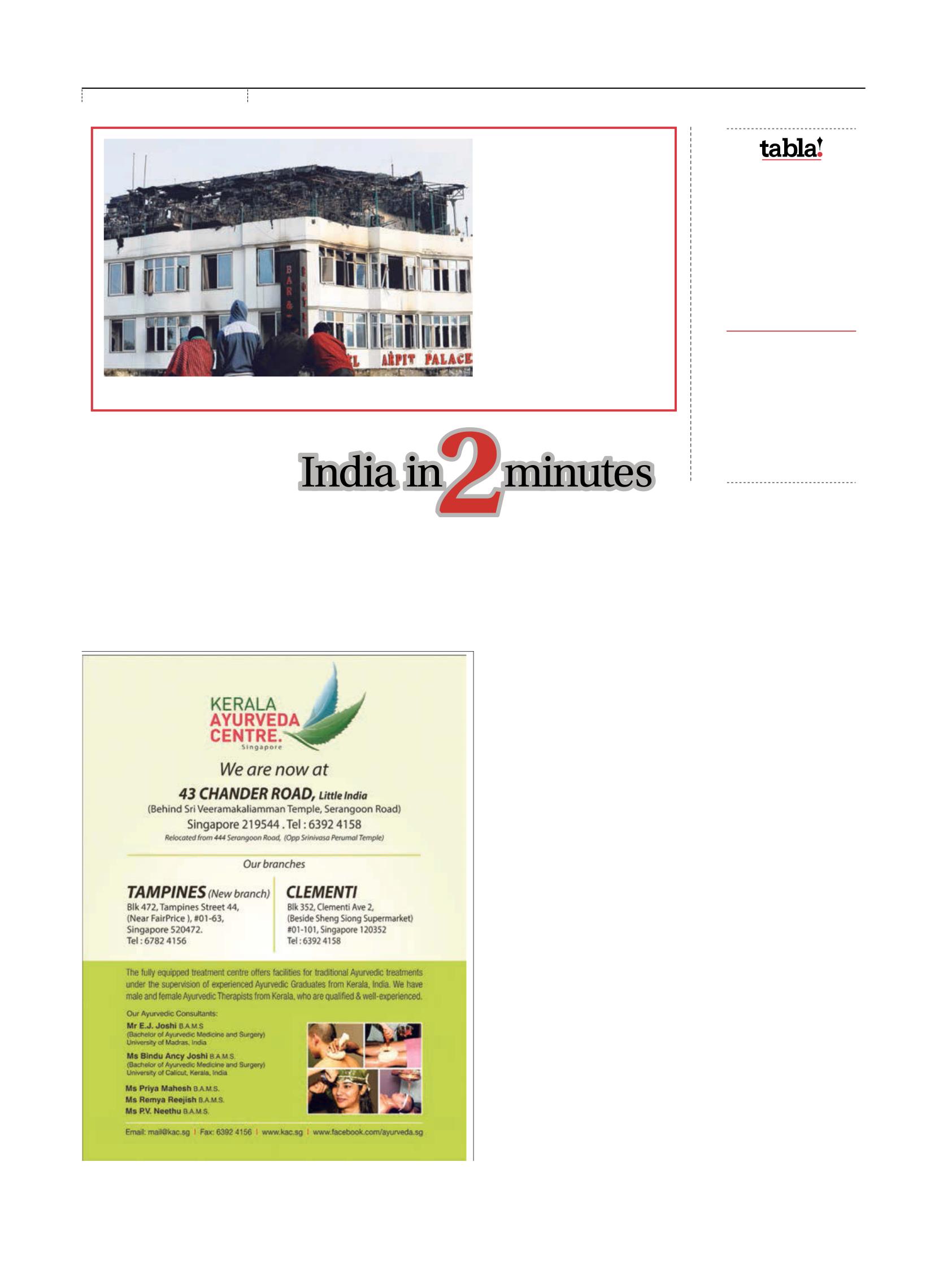 Write to us at

India’s first war memorial to be

India will get its first National War

Memorial 40 years after it was first

proposed by the armed forces.

The memorial, which will bear all

the names of independent India’s war

victims, will be inaugurated by Prime

The design of the memorial is a

series of four concentric circles or

the national symbol, the

Dharmachakra. It is situated in the “C

Hexagon” of the India Gate circle.

The project had been pending for

and had missed two deadlines – the last

Independence Day (Aug 15) and this

after 80 die from toxic hooch

Police have launched a crackdown on

illegal bootleggers after 80 people were

when victims across two neighbouring

states drank from the same batch of

illegal homemade brew, which was

produced by a criminal group operating

between Uttar Pradesh and

The majority of the deaths were

reported in Uttar Pradesh, with 36

dying in Saharanpur district and eight

in Kushinagar. Thirty-six people died in

Two suspects accused of selling the

illicit liquor have been arrested.

Shivaji’s Raigad Fort to be made

The hilltop Raigad Fort in Maharashtra

from where Chhatrapati Shivaji

Maharaj laid the foundations of

“Hindavi Swaraj” is poised for a major

revamp to make it a global tourist

which stands on a 820-metre hill and

presently managed by the

Highlights of the attraction will

include a heritage walk encompassing a

14km and four-hour tour of the fort and

more than 350 historic sites within it

which tourists will get to explore

previous year, according to data from

Provisional data from the board also

suggested that tea exports, in value

crores in the same period a year ago.

and China went up, while the

shipments to Germany, the UK and

and Kazakhstan, were down in volume

Bhola was on Wednesday convicted

and sentenced by a special Central

Bureau of Investigation court in a

He was sentenced to imprisonment

cases in which he was convicted.

Bhola had been a deputy

superintendent in the Punjab Police but

was dismissed from service in 2012

after his links with the drugs racket

He was arrested in November 2013

in connection with a Rs700-crore drugs

Three cities have beaten Delhi to

become India’s most polluted this year,

with Patna emerging as the first.

The other two cities occupying

This is according to a study released

by IIT-Kanpur and non-government

The study also revealed that the

pollution than China this year.

It is based on data studied over a

45-day period through October and

A heavy penalty of up to Rs1 lakh will

be imposed on those who flout the

the bill in the Tamil Nadu Assembly on

The bill amends laws relating to

powers of municipal corporations and

municipalities to levy fines on those

violating the ban on single-use plastics.

Onlookers on the rooftop of a building next to the hotel where a fire broke out.

At least 17 people were killed when a

fire engulfed a five-storey hotel in the

heart of Delhi before dawn on

Tuesday, leaving some survivors in

critical condition and others dazed

The dead included at least two

women from Myanmar and a child

who could not escape the leaping

flames and the thick smoke at Hotel

Arpit Palace in the

members of a family from Kochi in

Kerala were also killed in the second

worst fire incident in the capital since

the 1997 Uphaar cinema tragedy in 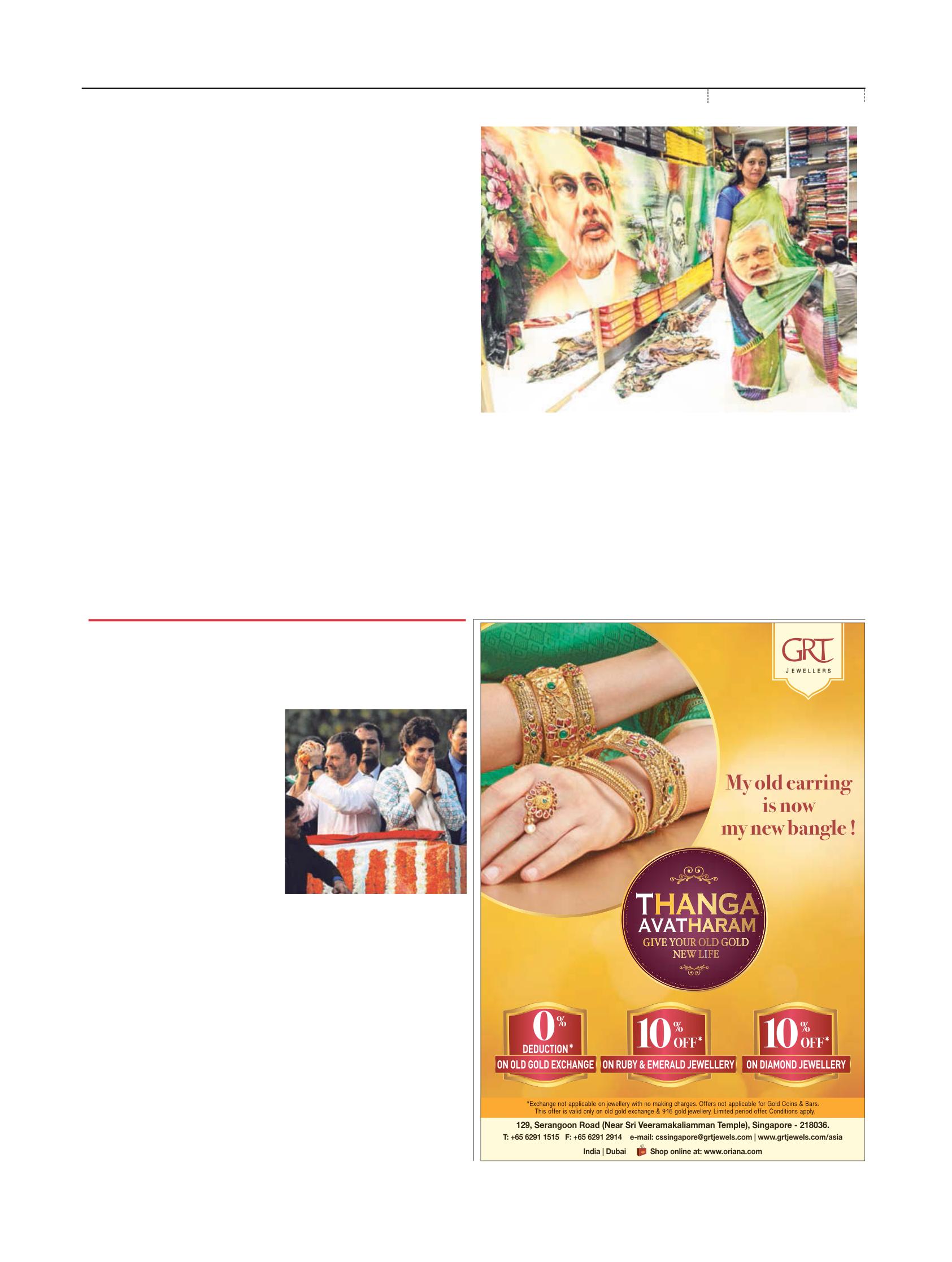 day unleashed its newest star – with

thousands turning out to see Priyanka

Gandhi Vadra speak at her first rally as

the country gears up for general elec-

Crowds showered rose petals on the

prime minister Jawaharlal Nehru as she

took an open-bus tour through Luc-

The opposition Congress party is

counting on the 47-year-old daughter of

Gandhi to boost its campaign against the

by Prime Minister Narendra Modi, who

is expected to call the elections in April.

at cheering supporters who chanted

their names while dancing to drums.

At a rally she called for supporters to

join a campaign to build “a new future”

for India and a “new kind of politics

where everyone is a stakeholder”.

But it will not be easy for the brother-

based parties now compete for power

with the BJP and Congress is only a mar-

party would win 74 seats this time.

Mrs Vadra stayed in Lucknow for

meetings with party workers from more

“I am still trying to understand what

are the issues and the complexities

where we lack in the organisation,” she

ers and taking their views on how to

that they were told: “My focus is on

strengthening the party organisation in

the state and to ensure that we win, the

‘muqabla’ (fight) is between Rahul and

Modi and not me.”

on how to win

due by May, supporters of Prime Minis-

ent ways to boost his image.

Some have imprinted his photo on

wedding invitations and gold and silver

bars, while others have him waving

from coffee mugs and T-shirts.

A shop owner in Surat, a city from

the state of Gujarat from which Mr Modi

hails, has gone a step further: He has

It is available in different styles. And,

after word spread about its availability,

women in Surat have been flocking to

the shop to buy the sari, reported the

Ronak Shah as saying: “The digitally-

printed sari has become a favourite

among women. We have four varieties

which we are selling currently. In the

coming days, we are planning to launch

saris of other politicians and leaders.”

Customers have the option to choose

between a sari that shows Mr Modi

against a backdrop of flowers or one

with the face of the Prime Minister

alongside what appears to be the demon-

A shopper told the Ahmedabad Mir-

ror: “When I went to the store, I saw the

sari with the photo of PM Modi. I really

liked it, so I bought it. To wear his sari is

a matter of pride.”

According to the Times of India, a

the wedding card of his son as a platform

to canvas for Mr Modi’s re-election.

68, asked guests to vote for Mr Modi in-

stead of giving gifts to the couple.

NDTV reported that a Gujarati fam-

son’s wedding and urged them to vote

The invitation card read: “Our gift is

on Jan 3 that Mr Modi’s government has

achieved a lot during its tenure: @naren-

dramodi Sir. With my wedding invita-

tion card, I am trying to explain the

Urging all invitees get the use. Hand to

hand helping them to get the max.bene-

fit. I believe “We have to take care of

NDTV also reported that a restau-

rant owner in Karnataka has been ap-

pealing to to his customers to vote for

Mr Modi during the coming elections.

It said Mr Velappa from Hubli has

stuck stickers and posters of Mr Modi on

his restaurant wall along with the

achievements and initiatives of the

ing quotes on the food bills, which has

taken his customers by surprise.

It quoted the restaurant owner as say-

ing: “I want people to give one more

Modi. I have pasted a lot of stickers of

the Prime Minister in my shop to influ-

ence people. I want my customers to

Mr Modi’s supporters in the past

have used the Swachh Bharat (a cam-

paign to clean the streets, roads and in-

frastructure of India’s cities, towns and

too. He had retweeted some of them.

face engraved on them. Mugs and T-shirts

with such photo impressions have also

been popular across the country.

A woman in a store in Surat trying on a “Modi Sari”. 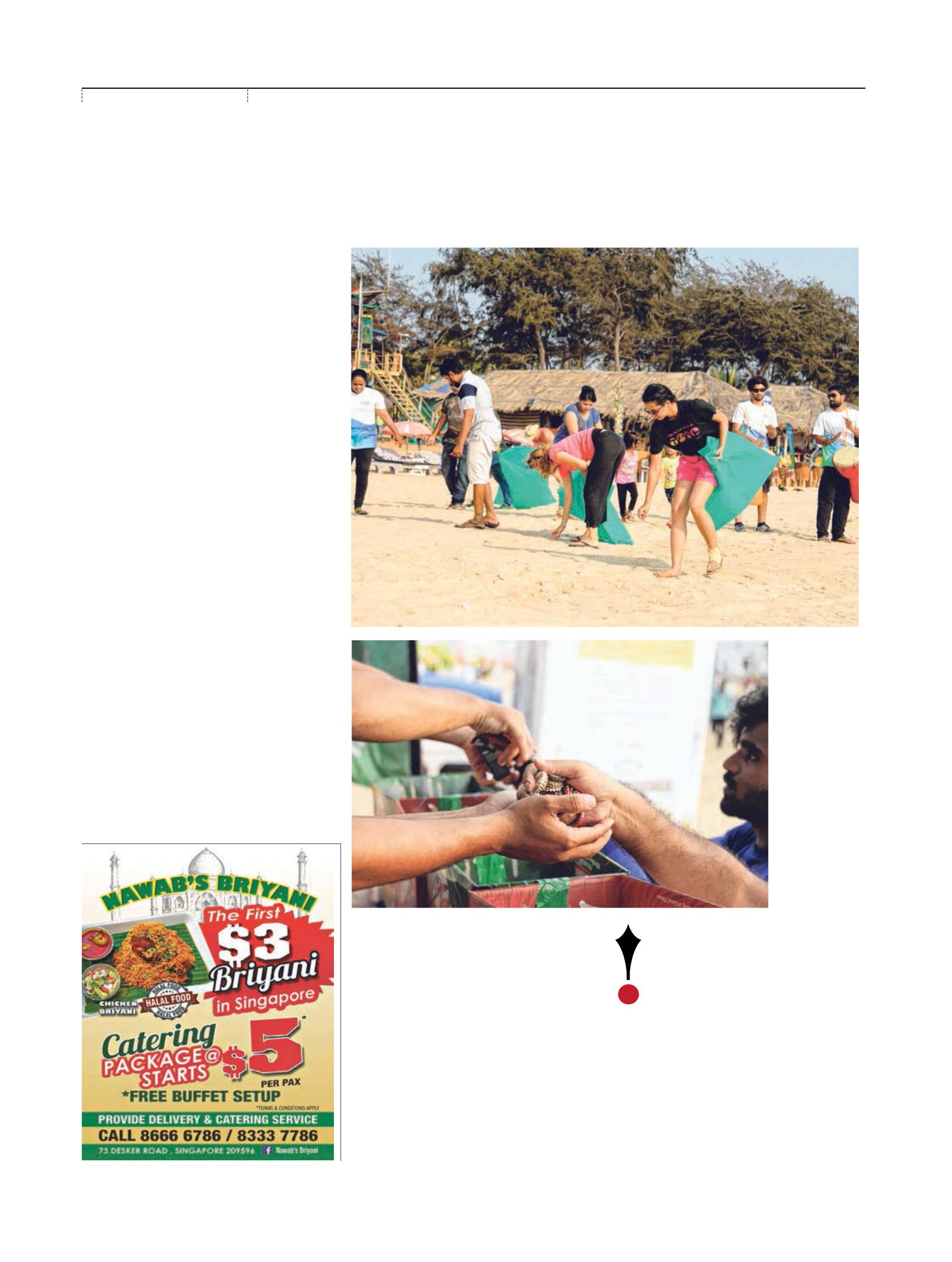 You could be fined Rs 2,000 for drinking beer on a Goa

beach, but thanks to an innovative green initiative, 10

beer bottle caps or 20 used cigarette butts can fetch you

a beer in the Indian state, if you exchange them at a

The idea is to engage beach visitors in activities that

create   awareness   about   environment   and   conserva-

tion, while also cleaning the beaches.

agement agency roped in by the state tourism ministry

to rein in the garbage menace on Goa’s beaches, the

waste bar is a hangout of sorts, where one can exchange

segregated garbage for a drink.

The initiative kicked off on Jan 30, when the first of

shack, located at the beach end of the popular Tito’s

Lane in the north Goan beach village of Baga.

“The waste bar is a win-win concept. It is positive for

the venue as it is an event that attracts a crowd.

“You get very happy customers as they feel they con-

tribute to society and get a free drink for it. And for

Holstein, who conceptualised the campaign along with

“People come to Goa for two things: beach and bar.

change for garbage that they collect.

“This ensures that they become conscious of the

waste that is there on the beach and that trash actually

has value. They will leave Goa with a positive feeling

and a clean beach.”

According to Ms van Holstein, waste bars kicked off

in the Netherlands years ago and the idea is catching

on. Apart from cigarette butts and bottle caps, five used

The waste bar will pop up at various venues in the

state in the next few months.

Goa is one of the top beach tourism destinations in

nually, of which more than half a million are foreigners.

Garbage piling up on the beaches in recent years has

been a cause for concern and has led to the appoint-

ment of a private agency to keep the beaches clean and

Over the past month, however, the government’s in-

ability to deal with the garbage menace, especially in ar-

eas which are popular with tourists, has been a major

area  of  concern  for  the  travel  and  tourism  industry

An ongoing tussle between the government and Dr-

the government for not handling the issue properly, es-

pecially during the peak tourist season.

“We ran an extremely successful campaign over 150

days in the last tourist season with the intention of creat-

about the importance of waste segregation. We made a

significantly positive impact on that front and hence

have decided to run the campaign this season as well,”

“We are also trying to help the beach shacks to re-

duce the use of disposable plastic like straws and make

the transition to being  more  sustainable operations.

The campaign will run till the end of the tourist sea-

Among other things, the waste items collected dur-

items, including music instruments, during workshops

run by the organisation.

beach and bar. So let’s give them

what they come for – free drinks in

exchange for garbage that they

collect. This ensures that they

become conscious of the waste that is

there on the beach and that trash actually

has value. They will leave Goa with a

positive feeling and a clean beach.”

for beer at Goa waste bars 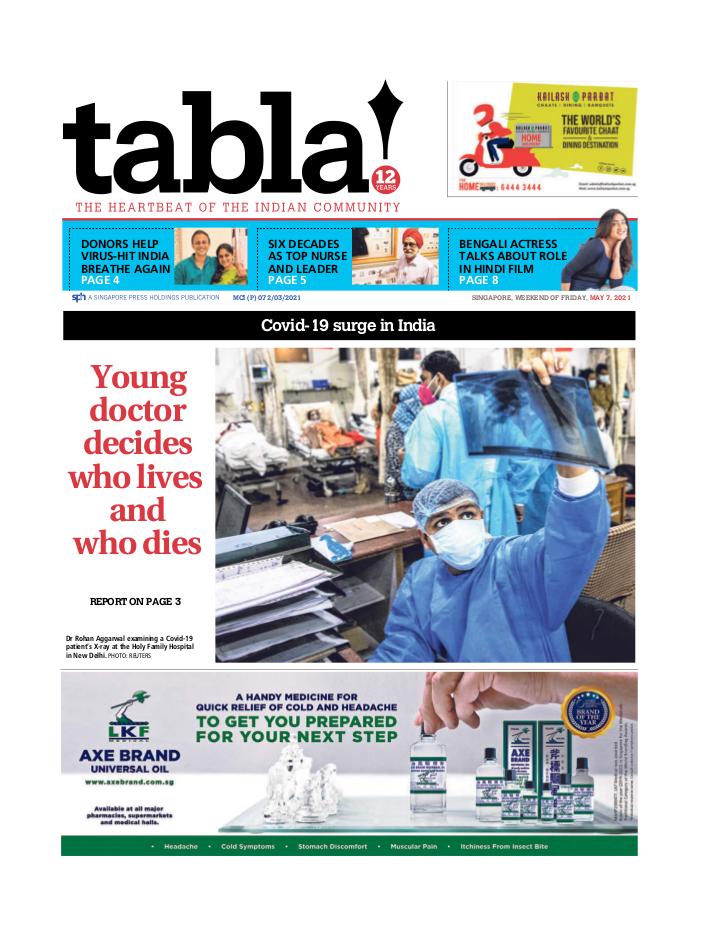 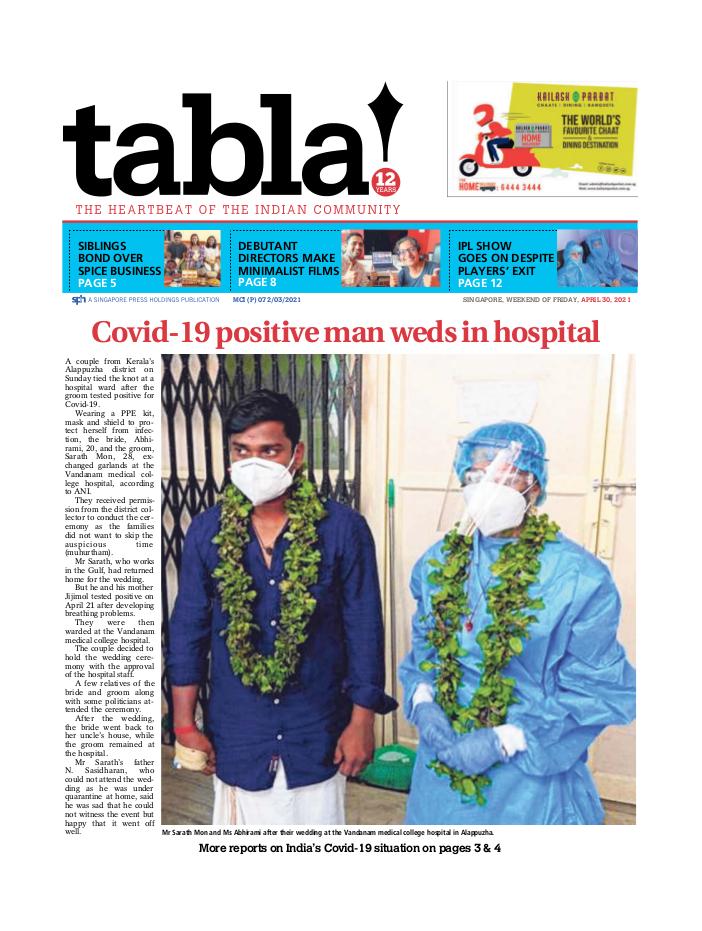 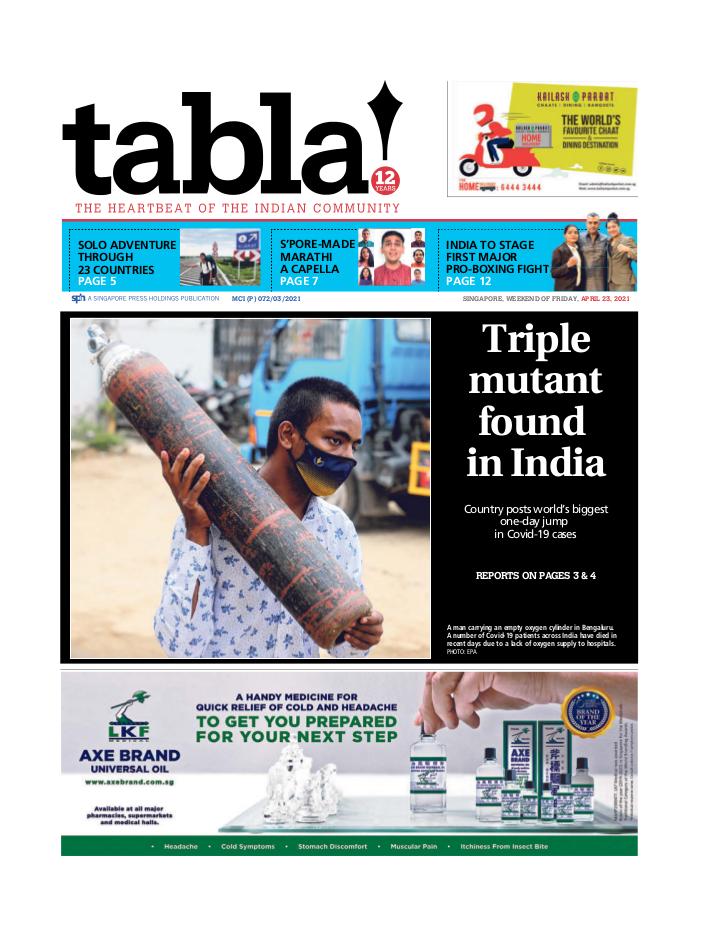 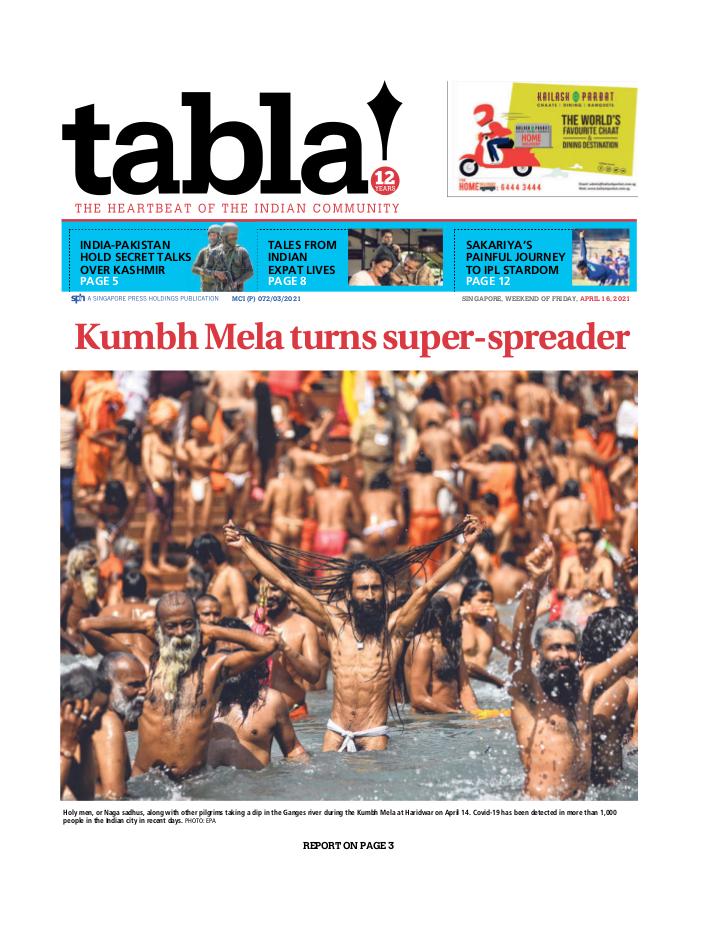